Drugs in Colombia are still around you just don’t see them anymore.  You don’t see the drug war on the good ol’ tele either as the British would say.  But just because you don’t find drugs readily available or see them on the streets doesn’t mean that they don’t exist.  Colombia has done a great job of cleaning up the streets and moving the drug scene away from both the media and most public places. 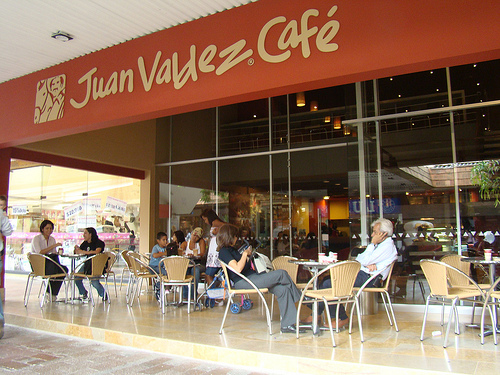 The only place where I saw drugs out in the open was in Cartagena.   I mean who doesn’t like to be offered cocaine and prostitutes form a nice well mannered drug dealer? Everyone’s dream right?

While there are plenty of stories of drug use in Colombia this post isn’t going to be one of them.  I clearly hooked you with the title of this post with a little advertising on Google and Twitter.  My drug is called Juan Valdez, sorry Starbucks I’m cheating on you.  The coffee is terribly addicting and my “non coffee” drinking friends always end up drinking it.

Juan Valdez is the biggest drug dealer in all of Colombia and has stores on almost every corner like Starbucks in the states. My drug of choice

Juan Valdez is the national coffee chain of Colombia and my preferred drug of choice from the menu is a Navado de Cafe (an Iced Coffee).  It’s overpriced like Starbucks and there isn’t an actual man named Juan Valdez.

The picture and promotion have supposedly come from a European Marketing firm out of Switzerland or Sweden if I am not mistaken.

The coffee is actually better than Starbucks and every day that I would walk home from the gym I would swing by the popular and foreigner infested Parque Lleras.

They have the coffee chains everywhere in the country and after our sushi hangovers we typically would go to the Juan Valdez nearby to get desert.

We of course would act hung-over and try our pick up lines that we practiced the night before in the mirror on one of the Colombian women serving the coffee.  There was only one mind you the others are.. well.. Colombian standerds challenged.  That would be a nice politically correct way to say it.

When in Rome do as the Romans do.  Colombians drink Juan Valdez, or at least that’s what the commercial says.