Uruguay is a country that is often overlooked by its bigger brothers Brazil and Argentina.  I wouldn’t go as far to say that Uruguay is a hidden gem, but South America’s 2nd smallest country has a great deal to offer.  You have some great history in cities like Colonia and you can even see great architecture in the capital of city of Montevideo.  While Argentina is known for having great steak, Uruguay is actually the world’s highest consumer of beef.  When you find yourself in Uruguay make sure to try plenty of meat!

The ashes of Jose Artigas

Unfortunately the city is deteriorating rapidly and it is nowhere near the splendor that it used to be.  There is still a great deal of culture to be seen and experienced.  The city has many faces to show from the World Trade Center Montevideo to the old city where you can view great architecture.  Make sure to head to Plaza Independencia and walk around for a bit to experience not only the Teatros Solis but the Artigas Mauseleom (shown above).  If you like adventure you can try attending a local soccer game.  Make sure try a good cut of beef!

The city was founded and eventually overtaken by Montevideo as the most important city in the country but Colonia still has a lot offer.  The city will remind you what life was like years ago with cobbled streets (watch your ankles!) and very humble historic buildings.

Colonia is set right on the riverside so make sure to walk around the shores and climb the stairs of the light house to get great views of the area.  You can reach Colonia via a short ferry from Buenos Aires or about a 2 hour drive from Montevideo.

I would like to introduce you to the Miami Beach of Uruguay.  Known for its beaches and nightlife, Punta Del Este is the place to go if you want a little sun, a little tan, and little kilombo (crazy parties).  Many Brazilians and Argentineans love to come to Punta Del Este for vacation and many famous names have been spotted in the city as well. 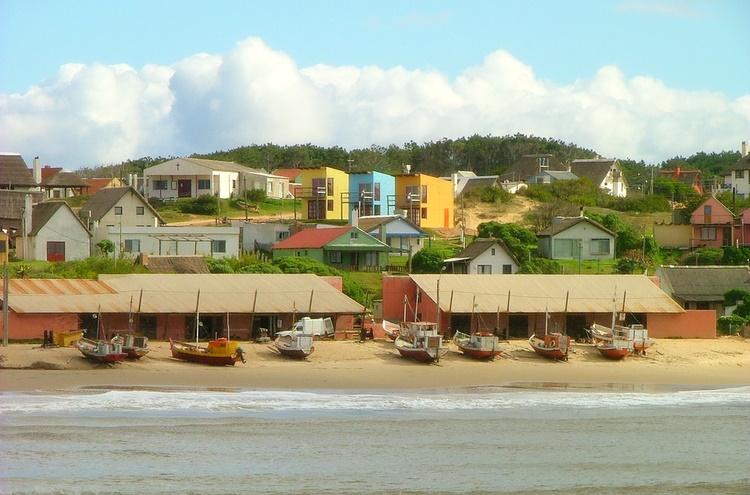 A picture of the village and beach of Punta Del Diablo, Uruguay

If Punta del Este is the Miami Beach of Uruguay, consider Punta Del Diablo its much younger sibling.  You won’t find any towering sky scrapers and you would be hard pressed to find famous names here.  Throughout the year the small beach town only has hundreds of people living there.

Once the summer rolls around that number jumps to thousands.  The small fishing village turns into a great hangout for young travelers!   The quaint beach town is up and coming and is a hidden jewel of Uruguay.  The rustic village is great for winding back time and relaxing a bit even for the older travelers.  It’s not on the tourist trail just yet so enjoy it before it gets on the tourist map.

The city of Salto is located on the eastern coast of Uruguay near Concordia, Argentina.  It’s a very picturesque city that has a relaxing feel the entire year.  You will find great opportunities to people watch and also sit down and have a great coffee.

You can visit the hot springs nearby called Termas del Arapey which similar to the Blue Lagoon in Iceland, they maintain an excellent temperature and have therapeutic properties.  The city is excellent for pictures with excellent parts squares throughout the entire city.  Once you visit make sure that you visit the zoo which has over 150 different species.