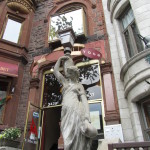 The great city of Montreal, it’s about as European as it gets in North America.  They speak French, consider themselves French, and fortunately for everyone there are rumors that they are much nicer than the infamous Parisians (sarcasm – but there is truth there).

When I first arrived in Toronto I talked about my first culture shock experience in culture shock Canada– Arriving in Toronto.  Everyone has a general idea of what to expect when you head to a foreign city or country especially when the media has painted a picture for us on the internet & TV.

This city is distinctly French, not in terms of sites but in terms of sounds and culture.  If Toronto is a mini New York City then Montreal can be compared to a mini Paris.

The signs in the city are all French and rarely are they in both English and French.

When anyone approaches you they always start speaking to you in French.  Be prepared because they will always continue ranting until you give them the infamous look of confusion.  Afterwards they speak English with hints of French.

Not to be vicious or mean like the infamous stories in Paris, it’s simply because that’s what they are used to.  Everyone has a French accent when they speak English as well.  If you ask any Canadian their favorite place to go to in Canada the most common answer will be Montreal.  It should on the top of anyone’s things to do in Canada list.

Montreal is Parisian in the fact that there are bicycle stations along almost every corner in the city that you can rent.  They serve 5 course meals at many restaurants and whether you are purple, green, black, white, or caramel, you speak French.  The city gives a homey feel to anyone that’s partaking in Quebec sightseeing.  An at home feeling that leaves an impression on you for days similar to taking your first European vacation (you remember that vacation don’t you?)  In the summer the people of Montreal have festivals every weekend.  I was lucky enough to see the festival of laughs on my weekend excursion to the Paris inspired city.  Any of the festivals in Montreal should be a must see Quebec sightseeing experience.

One thing that surprised me was the cars that they drove were actually American cars.  Big American muscle cars driving through small cobblestone streets and French café’s.  I was expecting there to be a flurry of European cars like Fiat and Renault, we are in Paris right?

That’s the only time that you realize that you aren’t in Paris.  You can even see the diversity of Canada in the French rich city.  I walked by an Asian woman speaking French and listening to reggae.  Where else does that happen in the world?

Not quite Paris but not quite America either:   The American Paris

Don’t forget to see our top 5 section for more things to do in Canada and around the world.