The temples of Abu Simbel is part of our new journey of discovery series which begins with one of the oldest civilizations in the world.

In this post we will be talking about some of the fascinating facts concerning Abu Simbel, the history, and many key details about visiting the site.

Ancient Egypt provides the traveler with such an abundance of architectural monuments, that one can easily explore the splendor of this ancient culture.

Egypt began a unified existence in 3150 BCE (before the Common Era) according to traditional history, leaving at least a 5,000 year long trace of human activity.

Many of the most famous sites of the past are quite well known and are found near major cities. This allows many tourists the opportunity to visit them quite easily. They are easily recognizable and include the Pyramids of Giza, the Sphinx, the temple of Karnak, Valley of the Kings and even the Palace of Hatshepsut.

One recognized monument, but one that is much farther removed from the other more celebrated treasures is Abu Simbel. The incredible temples of Abu Simbel complex was carved during the reign of the great Pharaoh Ramses II in the 13th century BCE. He reigned for 65 years and was near 90 when he died. He also sired over 100 children by numerous wives. 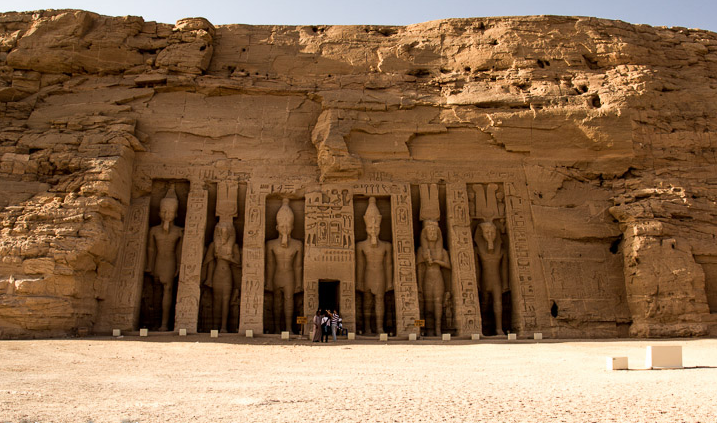 It was built in commemoration of the Battle of Kadesh against the Hittites. It honors the memories of Ramses II and his queen Nefertari. It can be found in southern Egypt, near the present day border with Sudan. It is located at the second cataract of the Nile river.

One of the Abu Simbel temples was placed here, because the area is sacred to Hathor, goddess of joy, love and motherhood.

There is also a nearby mine for more practical folk.

What is less well known is the entire memorial was disassembled into huge blocks (up to 30 tons but averaging 20) in 1968 and removed to higher ground. This had become necessary with the flooding of the area by the construction of the Aswan Dam.

The project was begun in 1964 and took four years to complete. Some of the structures were even saved from underneath the waters of the new Lake Nasser.

In one of the greatest challenges of archeological engineering painstakingly, piece by piece, it was removed and reassembled. The new location would be an artificial hill made from a domed structure at a cost of $40 million USD (United States dollar). 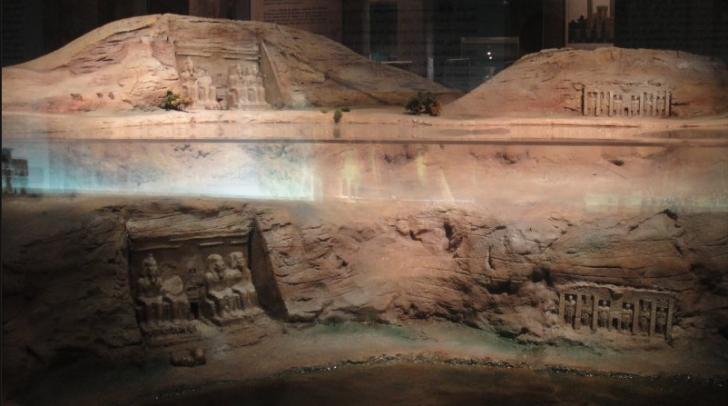 The Abu Simbel temples were built over a period of twenty years by all accounts. It had a further purpose to impress upon the people living in the area, of the great power of the god king living far to the north.

Centuries later the temple was no longer used and was gradually covered by sand. It was reported already in the 6th Century BCE, that everything below the knees of the four great statutes of Ramses were no longer visible. This actually helped preserve the site.

Abu Simbel would lie buried for many centuries, until its rediscovery in 1813 by Swiss explorer Johann-Ludwig Burckhardt. The site itself is supposedly named after a young local boy, who assisted in its rediscovery.

There are actually two temples in Abu Simbel. One is dedicated to the memory of Ramses II and the smaller one to his most favored wife, Queen Nefertari.

The Great Temple of Ramses stands 98 feet tall (30m) and 115 feet (35m) long. The entrance is topped by a carving of the Pharaoh himself worshiping the chief god Ra. Flanking the entrance is four seated colossal statutes of Ramses II on his throne.

Each towers over the visitor at 65 feet or 20 meters. That height is roughly 2.3 times smaller than the Statue of Liberty.

Around the knees are smaller carvings of wives and children.

One question that many tourists invariably ask is what happened to the second statue in from the left? The head and torso lie on the ground in front of the remaining portions. No one knows for sure as there is no written record. Most likely it was an tremor of some kind, that destabilized the rock face and it broke apart. There was no attempt to restore it during the move. The archeological purists would not stand for it.

Further around there are other smaller statutes that depict Ramses II and the various peoples he conquered.

Once inside one notices a triangular pattern, with the rooms decreasing in size as you progress into the temple. You will observe a number of engravings of Ramses II and his wife Nefertari. The first chamber consists of eight pillars, that are decorated to depict the victory at the Battle of Kadesh that took place in 1274 BCE.

Of course, it has recently been discovered that despite the historical propaganda surrounding this great battle, it is likely that the Hittites and Egyptians fought each other to a draw. That kind of information would not of been helpful to Ramses II at the time, so he embellished the strength of the Egyptian forces and his role in the sequence of events.

The second atrium opens up with four pillars decorated with images showing the god-king embracing various other gods. Beyond that is an inner sanctum, where one can find seated statutes of Ra, Amun, Ptah and Ramses II himself. 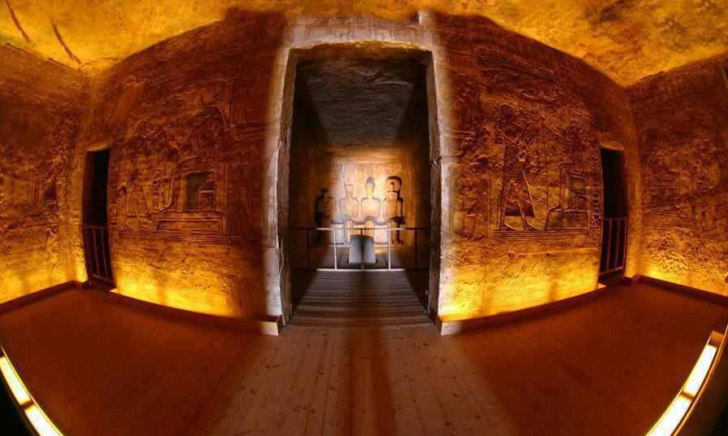 Unknown to many until they come to the Great Temple, is the fact that the original construction permitted the sun to actually light the inner chamber twice a year. This occurs on February 22nd and October 22nd. Sunlight on these dates permeates a total of 180 feet (55 meters). The statutes are all bathed in light, with the exception of Ptah the god of the underworld.

One can only guess the significance of these two dates. It might be the birthday and coronation of the Pharaoh, or possibly some other important event in his life.

The smaller temple in Abu Simbel was built for Queen Nefertari, was the first time a statue of a wife was carved to be the same height as the Pharaoh himself. The six statues that are found at the entrance are all about 32 feet high (10 meters). Four of them represent Ramses II and two depict his Queen. Smaller statues can be found next to these, which represent their children. Although they only reach as high as knee level.

Once inside there is a large hall which is supported by six pillars. Each one of these is carved with the head of Hathor. There are also scenes showing both the Ramses II and the Queen making offerings to various gods. In the inner room on the back wall, there is a relief showing Nefertari being crowned by Hathor and Isis.

There are a number of additional smaller rooms that depict more scenes of Ramses II, Queen Nefertari and other Egyptian gods. 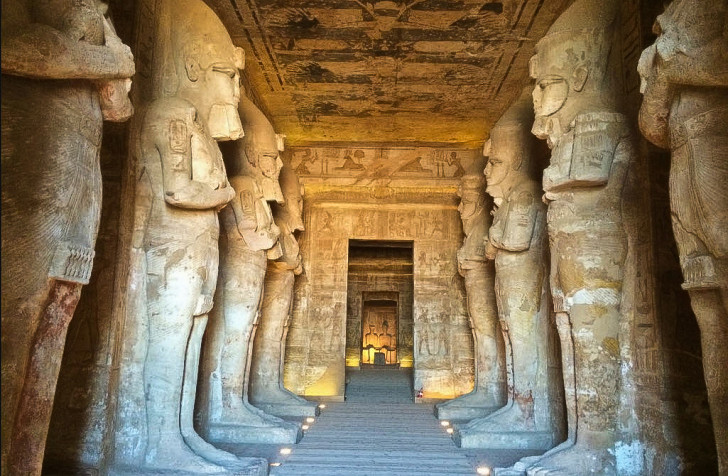 At most, only a few hundred tourists visit daily during the height of the season. Numbers have dropped substantially, due to safety concerns of many potential visitors. There is a reasonable fee for entrance at about $9.00 USD.

One can arrive by land or air. Guarded convoys of buses and cars set out from Aswan twice daily, which is the nearest city. It will take about 5 hours to make the trip as Abu Simbel is some 179 miles (288 km) away.

You can also come by plane and land in the airfield, that was built for the purpose of viewing Abu Simbel.

You might also wish to visit by cruise ship, either from the Nile River or Lake Nasser itself.

The carvings and art that decorate the two temples are incredible and originate to the time of its construction. As a way to preserve the site and to boost sales of merchandise, photography is no longer permitted. Visitors will be quite impressed with the hand carved pillars, carvings, giant statues and wall paintings.

The Tourist Bazaar Cafe is available for refreshments, but it is still advisable to bring bottled water for drinking.

If money is not an issue, one should plan to stay at the Nefertari Hotel Abu Simbel. It is within walking distance to the temple site.

It does matter when you visit, either early or late in the year. A summer trip can be unbearably hot, but since it is in the desert, it is a dry heat.

We hope you enjoy your trip to the Temples of Abu Simbel!