The fairy tale castle of Jeno Bory in Hungary, is the first in a new series of travel adventures, that will be known as A World Far And Away. Located near the capital of Budapest in Szekesfehervar, this architectural wonder was built by Jeno Bory, in an expression of love that would last for half a century.

Szekesfehervar is still known as the city of kings. During the long centuries of the Hungarian monarchy, it was where the crown and coronation accessories were kept. It is also the location of the state archives.

Today, the traveler will find winding streets and small squares that lead to cathedrals, mansions and increasingly, shops that cater to tourists.

Visitors will find all the standard styles of architecture in Szekesfehervar. These include Baroque, Neoclassicism and Rococo. Some consider this beautiful city, to be the real historic capital of Hungary.

Jeno Bory was a Hungarian architect and sculptor born in 1879. As a young man he would meet and fall in love, with his future wife llona

He later promised her that he would build a castle, that would allow them to live a fairy tale existence. Bory would spent nearly the next forty years, making this commitment a reality.

After receiving a degree in building engineering in 1903, he entered the Academy of Fine Arts to study sculpture. It was at this time, he met llona Komocsin. She became a painter, after graduating from the Academy.

Bory bought the one acre piece of land and small cottage in 1912, within the Maria Valley, outside of Szekesfehervar. The couple would soon spend their summer holidays there. 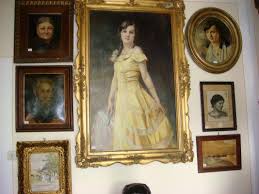 Most of the constructions beginning in 1923, were done through his own efforts. It has been said, that he did not even use plans throughout the building process.

Since the work took place on weekends alone, it would take decades to accomplish. Only rarely would he employ the talents of other individuals mostly his students.

Although this masterpiece in architecture is a wonder to behold, it is not actually a castle in the true sense, but mimics many of its features. It is also largely built from concrete, not stone or brick.

Another view of Bory Castle.

As his monument to love began to take form, he invariably combined various architectural styles that included Gothic, Renaissance and Romanesque.

Throughout the various elements of the structures, one can see the images of llona, who was considered by her contemporaries, to be an incredibly beautiful woman. There are portraits, sculptures, and even carved verses in her honor.

Paintings cover many of the walls, with a number of mosaics inside and outside of the building. Glass paintings and fountains appear in various locations, throughout the castle in the most unpredictable places.

Some of the outdoor sculptures at Bory Castle

The Bory love story will somewhat remind experienced visitors, of the legend regarding the Taj Mahal in India.

The Mughal Emperor Shah Jehan, had this magnificent 17th century marble mausoleum, constructed for the ever adoring memory of his wife, Mumtaz Mahal.

Travelers to the castle will be treated to numerous architectural features, that will delight the imagination. There are arches and galleries, columns and domes, and spiral staircases throughout.

The layout of the castle is emblematic of the architect’s life. There is the Chapel and the Studio Gallery. These were the two elements that played a prominent role, in his professional and personal life.

During World War I Bory was an official war artist in Sarajevo. He would later be awarded an Order by Emperor Franz Josef I.

His talent in sculpture, allowed him to continue work on Bory Castle, long after he was no longer employed at the Academy or the University.

The huge number of sculptures he created over 40 years, provided much of the funding for castle constructions.

Some of the Gardens at Bory Castle

Several hundred statutes still remain in the castle. They were designed and created with diverse techniques.

Bory castle first opened its doors to the public in 1934. These early guests, were given tours by the owner himself.

As an ongoing project, Bory once said that it would never really be fully completed.

Jeno Bory would die in December of 1959 and llona would die fifteen years later in 1974.

Today, the Bory Castle is a private museum. It was lovingly restored by grandsons of Bory beginning in 1980.

Except for one portion of the castle, where the great grandsons of Bory live, the rest is open to the public for a rather small admission fee.

The building is 30 meters high (98.4 feet) from the dungeon to its tallest point among the towers. There are in fact, seven towers on the site.

The Bory Castle contains some 30 rooms, of various sizes, including three studios. One studio was used by Bory and his wife, as well as an art gallery and apartment or flat.

An abundance of antiquities and works of art, can be found throughout the castle.

One can find a gallery of sculptures, known as the Court of the Hundred Columns, with the likenesses of great Hungarians of the past, including Almos and Tinodi Lantos Sebestyen.

There are also bards, heroes and kings from an almost mythical past.

Besides creations of his and llona, works by other artists can be seen at the castle. The collection includes pieces from Janos Fadrusz, Aladar Korosfoi-Kriesch, Istvan Csok, and Vilmos Aba-Novak.

Many newlyweds will come to the castle, hoping to capture the magic of the place in their own marriages. It is a popular spot, for locals to take wedding pictures.

The surrounding gardens, fountain and courtyards, all add to the memorable experience of the place.

Thanks to a number of cultural events and programs held at the museum, the Bory family has been able to collect enough funding to maintain the property through a foundation.

The address of the Bory Castle Museum: 8000 Szekesfehervar, Mariavolgy ut 54.

Children (under the age of 6) Free

There is no accessibility features for the disabled.

There are restroom/toilet/WC facilities for visitors.

Public transportation by bus and rail is also available.

The Bory Castle is open:

Opening and closing days, somewhat depend on the calendar

There are some places to spend the evening, in the nearby towns and communities. There is a wide range of accommodations, to fit the needs of all travelers in Budapest, which is about an hours drive away.