The video below is just for kicks and giggles but the story you are about to read really did happen to me.  When I was living in Sicily I had one of the nicest landlords on the planet.  He was Italian which means his name had to be Giuseppe (insert hand motions here).  During one of my first nights in Sicily, he wanted to treat me to a dinner at his home so I could get an authentic taste of the new culture I was delving into.

First let me describe my landlord and his family.  It was a typical Italian family with the male patriarch running the household.  I could barely speak any Italian at this point so my conversation was limited to Spanish and lots of hand motions. 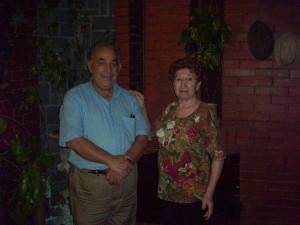 The orange juice in Italy is delicious since its fortified with plenty of sugar.  Sicilians are a very proud people, they don’t even consider themselves Italian!  If you ask a Sicilian where they are from they will clearly explain Sicily, not Italy.

Orange juice is the first thing we fought about and how Sicily didn’t have the world’s best Orange juice.  I said Florida orange juice (which is all natural) compared to the sugar infested orange juice they have in Italy.  Poppa wouldn’t let it go until I brought him some natural home grown orange juice from the sunshine state.

If you didn’t know, Sicilians also speak a different dialect of Italian.  Most Americans are confused by this since most people in the states speak the same “relative” language (I think you know what I mean when I say relative).  To give you an idea its like speaking with someone with a Boston accent compared to someone from the middle of Idaho, but with much more variation.  I have asked northern Italians whether they can understand Sicilian and most say it’s very difficult to make out.

After debating about how Sicily has the best everything, we moved on to the 9th course, otherwise known as the main course.  It was a soft al dente pasta with the richest of marinara sauces.  Southern Italian cuisine is identified by the use of more tomatoes while the north is highlighted by more white sauces.  I could throw the pasta against the slipperiest of objects and it would still stick.  The stuff was delicious and very rich.

I proceeded to salivate over the pasta and gently picked up my knife and fork.  They are even proper at home by serving you a spoon to scoop the retarded pasta that never wants to get on your fork.  I simply started playing tick, tack, toe with my pasta, and cut it into squares.  And thats when all hell broke loose.  It went a little something like this:

Eventually I understood that I should mess with a man’s pasta.  I think its so funny how when you are in different cultures the smallest things could be consider a “no-no”.  I never tried to cut my pasta again and I was even able to get all the retarded pasta strings on my spoon!  lol

Afterwards, he served French style crepes with Nutella for dessert.  We would hang out often because poppa was a hysterical man.  Every time we would eat pasta I would pretend that I was going to cut it and the hairs on his head would immediately stand to attention! Speaking of which, I have some Nutella in the pantry, end of post.