In the southeast regions of France, there remains an architectural treasure from the ancient world. It is the Roman Aqueduct of Pont Du Gard. The structure built possibly around 19 BCE, is a testament to the builders, who created an engineering marvel, that survives to this day. The construction made out of limestone is both beautiful and practical in function, carrying both water and people across the Gardon River.

The Pont du Gard aqueduct was added to UNESCO’s list of historically significant World Heritage Sites in 1985. It is the highest of all elevated Roman aqueducts and one of the best preserved. It is the 10th stop in our series A World Far And Away.

It is known as one of the top 5 tourist attractions in France, with well over 1 million visitors a year.

Built near the modern town of Vers-Pont-du-Gard, the aqueduct was built as three tiers of archways, to bring water to the French city of Nimes. It has been maintained by the Public Association of Cultural Cooperation since 2003.

The Roman Aqueduct of Pont de Gard, has survived for over 2000 thousand years, because the local populace maintained it, long after the demise of the Roman Empire. As the classical period collapsed in the 4th and 5th centuries, many of the other aqueducts were allowed over time, to fall into disrepair.

Map of the Roman Empire in pink, origin of the Germanic peoples shaded in green.

The destruction of the aqueduct system was at first seen, as a method to help with the conquest of Roman territory. Some Germanic invaders would actually knock down the aqueducts, to disrupt the supply of water, to cities under siege. An example of this was the attack on Rome, by the Vandals in 455 CE. Another would be the attack on Rome by the Goths, during the siege of 537 and 538 CE.

The need to move large quantities of clean water from the countryside to the cities, became increasingly less important, as the depopulation of urban areas continued apace, with the disintegration of the Roman world. In fact, a number of them were intentionally destroyed, to force citizenry to abandon their homes. 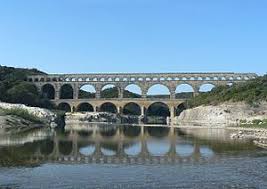 The Roman aqueduct, located at Pont de Gard in France, is in such good shape because it was maintained, long after the fall of the Roman Empire due to its use in transportation, not so much as an aqueduct.

In its heyday, this aqueduct carried around 8.8 million gallons of water a day to homes, public baths, and town fountains, for the people of the area.

The entire aqueduct system covered many miles of ground and was built at a cost of over 30 million sesterces, an enormous sum at the time. It would be the equivalent of 50 years pay for 500 new recruits, in one of the Roman legions. The daily wage of a Roman soldier at the time was just 3 sesterces.

The Pont du Gard aqueduct may well have been used as late as the 6th century, with a number of sections even longer. It was the lack of regular maintenance after the 4th century, that would gradually lead, to the disruption of the flow in water. The buildup in debris and mineral deposits over time, totally clogged the system.

The spring water contains high levels of dissolved calcium carbonate. Leached out from surrounding limestone deposits, this material would build up over time, blocking the water from passing through. Along with constant intrusive vegetation growth, it made periodic cleaning essential, to maintain the flow of water.

Bust of Marcus Vipsanius Agrippa from the Forum of Gabii, currently in the Louvre, Paris

With the collapse of the Roman Empire and the gradual silting up of the aqueduct, the Pont du Gard Aqueduct remained important, due to its secondary function as a way to cross the Gardon River. It would continue to function as a toll bridge, throughout the Middle Ages.

The Pont du Gard bridge is only part of the Nimes aqueduct system, a 31 mile (50 kilometer) system that according to tradition, was built by Marcus Vipsanius Agrippa around 19 BCE, to serve Nemausus, which is modern day Nimes.

It took near 27 hours for the water to travel from the spring to the city of Nimes.

As a son in law and adjutant to Emperor Caesar Augustus, Agrippa held the office of aedile. This was the senior official responsible for managing the entire water supply, for the city of Rome and its colonies.

Modern excavations however, suggest the aqueduct may have been built sometime between 40 and 60 CE. Coins discovered in the outflow in Nimes, only date back to the time of Emperor Claudius, whose reign lasted from 41 to 54 CE.

It is thought the Nimes aqueduct system would have taken about 15 years to build and would of employed anywhere from 800 to 1000 people to complete.

The uneven terrain from the spring to the city, led to a long and winding path, that would necessitate the need for a bridge across the rather large gorge of the Gardon River.

The bridge itself was created by use of three tiers of arches, that reach a height of 160 feet (48.8 meters). The number of spans on the upper level totals 35 (originally 47). The mid level has 11 spans with the lowest one at just 6. The height of the aqueduct section alone, is 6 feet (1.8 meters).

The bridge is supported by 5 piers, placed in the river bed. 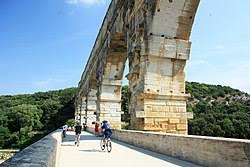 The width of the bridge is 21 feet (6.4 meters) at its maximum, with the upper aqueduct portion measuring 4 feet or 1.2 meters.

As an example of the accuracy in precision of Roman engineers, the entire bridge descends only one inch (2.5 centimeters) a gradient of only 1 in 18,241. The entire aqueduct system descends in height, a mere 41 feet (12.6 meters). 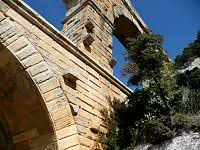 The Pont du Gard was constructed mostly without the use of mortar or clamps. It contains an estimated 50,400 tons of limestone, with a total volume of 740,000 cubic feet. Some of the individual blocks weigh up to 6 tons.

The Shelly limestone used in construction is coarse-grained and soft reddish in color. It lends itself well for a building material, allowing precise cuttings, that are held together by friction and gravity alone. It thus eliminates the need for mortar, which will deteriorate over time. It is one of the reasons why the bridge has lasted through the ages.

In the centuries following the collapse of the Roman Empire, local bishops and nobles became responsible for the upkeep of the bridge. In exchange, they were permitted to charge tolls to travelers, needing to cross the Gardon River.

In the 13th century the French king granted this right to the lords of Uzes, which was later passed to the bishops of the area.

Over the years a number of stones had been looted from the bridge. However the most serious damage occurred in the 1620’s, when Henri Duke of Rohan, wanted to use the bridge to transport artillery, during the wars between the Huguenots and the French royalists.

To accomplish his task, the Duke had one side of the second row of arches cut away to a depth of about one-third of its original width. Carts and cannons could now be accommodated, but it left the bridge severely weakened, as a result. 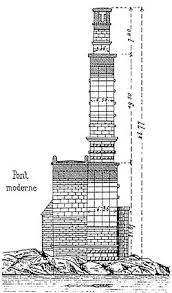 The following century would bring increasing attention by the French government and those interested in traveling to see unique historical sites.

As the aqueduct bridge became a more popular tourist destination, it prompted the local authorities and the national government of France, to begin a series of renovations from the 18th through the 21st centuries.

It would become part of the famous Grand Tour of Europe and a desired stop for those on a Compagnons du Tour de France.

In 1703, an effort was made locally to begin repair work and replacement for missing stones. This culminated in the construction of a new bridge from 1743 to 1747, next to the arches on the lower level.

By 1830’s it was in serious danger of collapse, from the loss of so much of the original stone work and the tireless forces of erosion. 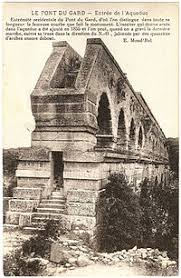 Side view of the aqueduct bridge.

When the French Emperor Napoleon III visited the site in 1850, he would soon after approve the plans drawn up by the architect Charles Laisne, in an effort to save the landmark. This restoration project would actually be completed, during the years 1855 to 1858.

Interestingly, for the benefit of tourists, stairs were now installed at one end, allowing visitors to walk along the conduit itself, with some caution.

Subsequent projects continued to focus on providing further architectural support to the arches and piers. It has survived three major floods over the last century, alone. In 1958 for example, the whole lower level of the bridge was submerged by water, in a deluge that washed away other bridges.

Another serious flood would occur in 1998 and again in 2002, damaging a number of nearby facilities.

In the year 2000, there was an opening of a new visitor center and the final removal of traffic and buildings from the bridge. This would also include any more recent structures, in the adjoining area.

If you wish to go on an organized tour of the site:

Evening rates in July and August only, closing at 11 pm.

Free for under 17 years of age

Parking is included in the price of admission.

The site is accessible 7 days a week, year round. There are varying hours of operation, depending on the season. It is normally open by 9:00 am and closes as early as 6:00 pm in the winter months. During the height of the tourist season it remains open until 10 and 11 pm.

It will be far more crowded during the summer months, when more people are on vacation.