Church in Savoca where the marriage occcurred

I honestly was never a huge Godfather fan, I have watched all three films and did enjoy them but not fanatical about them.  What I have been more obsessed with is the actual Italian Mafia.  When I was living in Sicily for close to two years I actually ran into the Mafia, everywhere.

The first time was in a cafe where they were, um, “hanging out”.  I actually got to interact with them and they were pretty cool which means they didn’t mug me.  There are a lot of people that are clearly fascinated with the mafia and since Sicily is one of the havens for the Italian mafia you can find them everywhere.

One city that will pop out at you right away is the city of Corleone.  The infamous Corleone family from the movie came from the this city and if you visit it you will be very disappointed.

When I think of Corleone, it reminds me of something dark and underdeveloped.  This of course is the exact opposite as even the movie crew from The Godfather didn’t choose the city because it looks overdeveloped. But you can go and say you have been there, it kind of cool to say that you been to Corleone (thats why I went).

The beginning of Forza D’Agro

The cities where they did filming in Sicily were Forza D’Agro and Savoca near the very touristy city of Taormina.  While Taormina is considered a tourist trap by any means, Froza D’Agro and Savoca are a much different breed.  Both will be very tranquil and quiet while you explore, makes it feel like there were plenty of opportunities to bury bodies in the area!

Taormina doesn’t allow any cars on its street which is a guide to how touristy it is but the two cities where the Godfather was filmed do allow you to drive up.  In both cities you can view the country side’s and different scenes from the movie in addition to churches.  You can also see the Bar Vitelli where a scene was filmed in Savoca as well.

Both give you a very eerie feeling as you walk around, especially Forza D’Agro.  In the city they have the cemetery at the top of the hill looking over city and you really get a sense of death, the cold winds don’t of course. 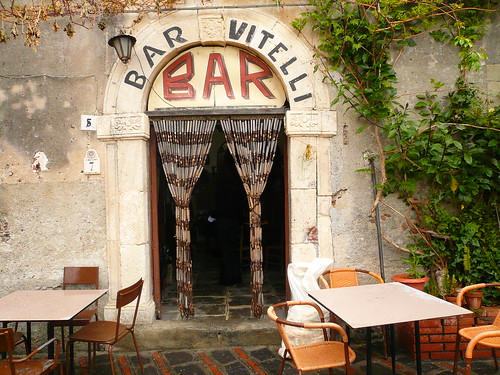 The Bar Vitelli shown in the Godfather 1. Photo Credit: GLanzoni

The best way to see Sicily is to rent a car but that can get very expensive if you aren’t traveling in a group.  Luckily, Sicily has great mass transportation, they have both buses and trains (always late of course).

Fly into the Catania international airport and you can arrive in Taormina in roughly 1 – 1.5 hours (1 if driving).  From there you can easily drive or take a bus to see Forza D’Agro and Savoca.  Don’t forget to check out the other great things to do in Sicily!