I never like traveling to Venezuela, especially since the country has turned into the red headed step child of South America. For those of you that didn’t know I was born in a small city in the country called Merida, near the border of Colombia. The last time I traveled to Venezuela was when I was 16 to visit all my relatives.

This uneventful trip is credited to the wedding of my Aunt.

I took some precautions like not checking any luggage and trying to put on a fake tan to not look so white. Even though I was born in Venezuela, I look more gringo than a pasty white cracker. Not only did I put dollars inside of my underwear so they couldn’t find it, I also had wedding gifts. Nothing like carrying precious antique Bavarian glass in your backpack on your travels!

The kidnapping in Venezuela started when I walked off the plane, this wasn’t the Venezuela I remembered. The second I walked through customs there were several individuals that walked up to me to exchange money. Of course I said! Who wouldn’t like to exchange money with a non official random person in a back alley of the airport in the most dangerous city in South America?

The bride to be!

The joke was on him since I had my cash in my underwear, there is no way he could snatch it! I promptly said no and whipped out my Venezuelan slang so they all would realize that I wasn’t American. Lucky for me I had plenty of Venezuelan slang on my white skin and green eyes which promptly sent every other hustler directly in my direction.

I was already a little grumpy since my favorite Venezuelan airline was the most efficient in the country. My flight from Miami to Caracas was not only delayed the plane was non existent. The company had to rent a plane from a cargo company to get the passengers from Miami to Caracas. On a side note I would like to vote the labyrinth in the Miami International as the worse airport in the United States, but I digress.

I was very worried that I would have missed my next connection to Merida. I couldn’t find my way around since the international airport in Caracas has gone through more changes than the Oprah Winfrey’s body weight. Love you Oprah!

After I bamboozled my way through the crafty currency exchangers, I sat down to refocus and see where the nearest sushi bar was. Why would I be looking for a sushi bar at this time you ask? Because I like sushi.

An example of Bavarian Glass

I sat down to catch my breathe and just relax a little when it hit me, I needed to make sure I wasn’t late for my next flight. Since there is no corruption in South America I realized that I could trust any person in uniform.

Now you have the convenience of walking inside a safe air conditioned terminal that connects the two. The connection was under construction at the time, I was fortunate enough to get there the old fashioned way; walking outside, alone, right next to a major highway.

When I finally figured out the direction I needed to walk I realized my next connection was delayed by another 4 hours. Promptly headed in the right direction I encountered the taxi mafia. I am sure you are familiar with locals trying to pressure you to take a taxis when you exit the terminal in many cities in South America. After ducking, diving, shimmy-ing, and checking my hair in the mirror, I finally made it outside. I was finally free. Wrong.

Once I walked roughly half way to the national terminal, I felt a wonderful square object on the lower right side of my back. Shortly after, the soothing voice of what seemed like the guy in the movie trailers said, “Metete en el carro chamo” (Get in the car my friend).

I found a new friend, I was so excited.

Once he shoved me in the car I started to look outside the windows to try and locate where they were heading. “Looking outside is not allowed” he said to which I replied “well can you just drop me off at the national airport then”. As we were driving he asked me for my camera and my cell phone. For a split second I almost asked for my memory card back.

Yes I had THOSE kinds of pictures. Afterwards, he was very disappointed to find out that there was no money in my wallet. What he did find was my Venezuelan ID card (which they call a Cedula). I thought I was safe now since he realized I was his brethren.

He immediately started looking for cash in my pockets. The fool didn’t know that I had the cash in my fruit of the looms! Ha Ha! I win! Shortly after he asked me to unbuckle my belt, I of course refused. While he was a good looking man he just wasn’t my type but more importantly, I don’t do those things on the first date.

I mean, what kind of man does this guy think I am?

I prefer my men with a much more feminine voice and a “go f** yourself” attitude once a month. If you didn’t get that last joke then you are hopeless.  He unbuckled my belt and found the cash, blasphemy! He was upset when he realized I was only carrying $50 dollars. After he started going through my back pack he found the Bavarian glass.

I was afraid that he would realize how expensive it was and would take that too. As luck would have it they were only interested in the electronics and the money. After he realized there was nothing else to take he was talking to me about how he was going to drop me off at the national airport. He gave me strict instructions to just walk inside and don’t look back. He had my wallet in his hand with my ATM cards, credit cards, and Id’s.

In most Latin American countries you have to pay the airport taxes separately. This means that once you check in you have pay the taxes in a separate counter. Realizing this, I tried to get my wallet back so they wouldn’t be able to get any money out of my accounts. I also realized that even if my flight left without me, I wouldn’t even be able to enter the terminal without paying the taxes. You did just read that this man fondled my knickers to get all the cash I had right?

We were going back and forth when the man finally gave the wallet back. I also was able to convince them to give me just enough money to pay the taxes at the airport so I could go home. I was a debate champion in college. Yes, even with a gun in my face. 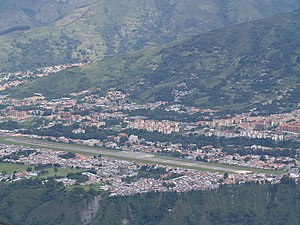 The International Airport in Merida

Once they dropped me off I tried to look back and get the license plate number, curiosity killed the cat right. They did let off a few rounds once they saw me which was awesome. They just shot the ground below me to scare me a bit. It honestly wouldn’t have made a difference, who was I going to speak to? Airport police?

Once I got back back to the airport the next flight was delayed even longer which meant I was just on time to sit and wait a bit more. Fortunately, my robbers gave me a tip for being robbed. Once I paid the taxes I entered the terminal and was on my merry way? You think that that’s the end of the story don’t you.

The city that I am from is in a valley in the Andes mountains. When I was born the country of Venezuela was booming and there were massive Boeing 747 jets landing on the smallest landing strips possible. If the pilots made one wrong turn or landed a few inches farther than where they were supposed to, there would be a few 100 feet of cliff to have fun in.

There was actually an accident recently which meant that no large planes were allowed to land in Merida. I had to land in a city 1 hour away from Merida and then hop a taxi to the city. Luckily I didn’t have any problems and my Aunt got her wedding gift. Good Times.