Well its official ladies and gentlemen, I am moving to Brazil.  I now have a different a focus other than just traveling around the world to see tourist attractions and get to know cultures.  I have been seriously slacking updating this travel blog because I started a brand new day trading company where I teach people how to day trade (TheDayTradingAcademy.com).  I have this crazy idea about opening up day trading centers in a few countries around the world to be able to provide someone with the opportunity of living their dreams.

Being that Brazil is known for women in thongs and men that wear shorts that packs everything in like a tuna can, I am left with no other option other than actually going back to the gym.  I decided to hang out in the United States for a bit to get caught up on things and I will also use this time to force myself to get back in shape.

Get ready to see me in some skinnies because I am going to get pumped up like Arnold, minus the steroids. I’ll talk in a little more detail about the process but I think it will be very interesting to chronicle the process of trying to lose weight while I travel.

Who really wants to work out while they travel?  Unfortunately for me I travel for a living!  Unfortunately right? Now on to the good stuff, what do I have left to see in South America? 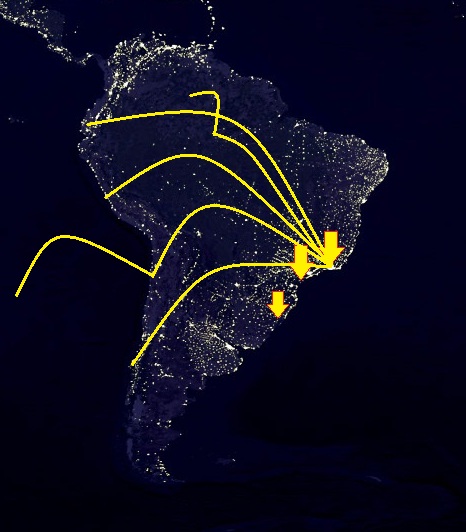 The first problem with moving to Brazil is that I don’t know where to move!  Rio De Janeiro is the obvious choice but not so fast.  The downside is that many people have told me that Rio is a complete dump, extremely dirty, etc.

I usually reply BUT ITS RIO!

I sadly told Floripa that Medellin has my heart but thats besides the point.  I am only interested in Porto Alegre because there have been three people that have contacted me about day trading from the city which leads me to believe that there may be a great day trading community there.

Even though I used to live in Chile, I would like to explore the country a little more as I have heard great things about the Chilean Patagonia.  There is an island called Chiloe which has incredible beauty and I would also like to get to the northern city of Arica which supposedly has a church that was designed by Eiffel.

What the hell is there to see in Brazil?

I sound very ignorant saying that but I honestly haven’t done that much research and outside of the ordinary tourist attractions like beaches, Rio, Salvador, Carnival, and Amazon Rainforest, what exactly is there to see in Rio.  The country has amazing culture which I am really excited about delving into but I am also interested in learning about all of the things to see and do in the country.

After that all that is left is Venezuela and the Angel Falls.  I’d like to take one of those river cruises where you sleep in a hammock while it sways automatically because of the boat rocking.  They actually have suites where you get your own room and privacy, the bathrooms are public however, I’ve heard its just off the side of the boat but thats besides the point.

Catch you in Brazil!

Itineraries Around the World: