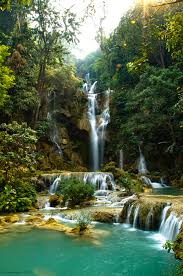 Kuang Si Falls also known as Tat Kuang Si Waterfalls, is a short distance south, of the ancient capital of Luang Prabang in Laos. One of the most famous water feature in Southeast Asia, Kuang Si is a three tier waterfall,with the main cascade dropping some 200 feet (60 meters). It is the second travel adventure in our new series A World Far And Away.

The local legend on their creation tell a story of how an old sage was able to summon the water by digging into the earth. The tale goes on to explain how a deer made its home under a rock sticking out from under the new aquamarine waters.

This narrative provides the origination of the name Kuang Si. Kuang means deer and si equates to dig.

The Kuang Si Falls begin with shallow pools atop a steep hillside. 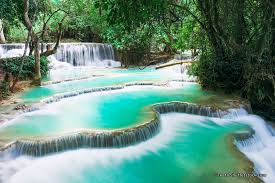 The falls are accessed through a trail to the left of the falls.

As one approaches this magical place, there is a feeling that you have entered a surreal reality. The tropical trees that surround the falls, allow filtered light to penetrate to the water, giving it an almost dreamlike ambiance.

The water that makes up Kuang Si Falls, collects in turquoise blue pools as it flows further downstream. The numerous cascades of water are typical of travertine waterfalls. 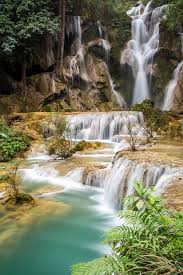 Travertine is a form of limestone deposited by mineral springs. It is formed by a process of rapid precipitation of calcium carbonate, often found at the mouth of a hot spring or in a limestone cave.

In the United States such type of springs are found in Yellowstone National Park at Grand Prismatic and Mammoth Hot Springs. They are also to be found at Hot Springs State Park in Thermopolis also in Wyoming.

Other American states where they can be viewed include Arizona, Colorado, Oklahoma and Texas.

More examples of travertine springs are to be found at Pamukkale, Turkey and Huanglong China. Further sites are in Afghanistan, Guatemala, Hungary, Iceland, Indonesia, Iran, Mexico and Spain.

One of the most famous group of falls of this variety can be seen in Croatia, at the famous Plitvice Lakes National Park.

The local living in this area of Laos, do charge a nominal fee to visit Kuang Si Falls.

At the bottom of the falls,there is a winding trail where you will begin your ascent. You will first pass an enclosure that houses a number of Asian black bears, which have been rescued from poachers.

The pathway continues through the woods until you reach the first set of pools. The falls here are only 15 to 20 feet in height.

The falls are well maintained with a number of bridges and walkways, making it quite accessible to tourists.

Almost all the pools are open to swimming by tourists, except one which is deemed to be sacred by locals.

Tourists can avail themselves of the changing rooms and picnic areas located at a number of the smaller pools. The areas is mostly shaded and cool. The water from the spring, will be surprisingly cold.

One will witness, travelers and locals jumping off the shorter cascades of water. Others will try their luck at jumping from a number of trees, with limbs that extend out over the area of water. 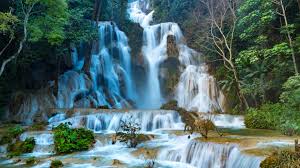 For those visitors who wish it, the hike up to the top waterfall is well worth it. The trail is steep and quite slippery. At the top of the falls one can cross over the waterfalls and look at the pools of water below. There is a deck area up here and a number of benches.

The walkways are not as well maintained at the top of the falls.

From up here it is far less crowded and one is afforded an incredible view. The visitor is able to see a vast expanse of green that seems to go on for ever. That is one of the advantage of traveling to Laos, so much of the country remains unspoiled and in its natural state.

There is a less well known pool that is to be found at mid-level. It can be accessed by following a small path in the forest. It is partly blocked by a barbed wire fence with boards attached. Tourists are not really welcomed here, but many visitors once they here of its existence, insist on seeing it.

Since far fewer people come to this pool, it affords one a more individual way to enjoy this really spiritual place. A visitor almost expects to see, a sprite or fairy to appear among the dense tropical vegetation, as sunlight attempts to enter the realm.

Kuang Si Falls are located about 18 miles or 29 kilometers south of Luang Prabang. It will take you approximately 50 minutes to one hour from Luang Prabang to the falls.

There is no real accessibility featured for the disabled.

Transportation is available by bus as part of a tour. However, given the inexpensive cost of local taxis known as tuk-tuk, it is recommended to hire one of these for your trip out to the falls. The price is negotiable. The cost should be between $5.00 and $7.00 USD, for a half day rental.

Kuang Si Falls are open daily, throughout the year.

There is a variety of food, that can be purchased ready made, that line the road in an out of Kuang Si Falls. It is quite tasty and usually safe to eat, since most of it is made fresh daily. It is very reasonably priced. You can have a quick lunch for under $5.00 USD.

Is available in the city of Luang Prabang,the former royal capital of Laos until 1975. It is well known for its many Buddhist Temples.