Back in March 2009, I was a grad student at the London School of Economics and my friends, KK and Jessica, came to visit me for a week. During their stay, we decided to hop on a Ryanair flight to Tenerife in the Canary Islands. On the morning that we left, we awoke SUPER EARLY to get our bus to Victoria station so we could get another bus to Stansted airport for our flight to Tenerife. We arrived on the island and it was sunny and warm.

We had decided to rent a car but my friend Jessica had to drive because it was a manual transmission and she was the only one who knew how. We also thought it would be a good idea to rent a Garmin to give us directions to the hostel on the northern side of the island. WRONG. That stupid GPS sent us up and over the volcano in the middle of the island so we could get to our hostel in La Orotava. Instead, we could have taken the easy highways and saved 2 hours but NOOO. When we got near the top of the mountain, we saw a car that had nearly driven off a cliff!

The Steep streets of the city

Then, our fate seemed to be the same when the GPS sent us down this REALLY steep hill close to the hostel. I’m talking about a 180° degree straight drop. At the bottom was what appeared to be a dead end. Our stomachs dropped as we all looked back up the hill from whence we had just come and realized that there was absolutely no way Jessica would be able to make it up the hill driving stick. Before panicking, I got out of the car and checked to see if there was a ramp leading down to the street below, just beyond the “dead end”.

There was. The turn onto the ramp was really tight, though, and the car couldn’t make it. So as Jessica inched forward, with KK’s blessing from outside the car (she wanted no part in the ramp experiment), the front right tire actually slipped off the ramp and Jessica immediately put the car in park. If she had tried to back up, we were afraid that it would still roll forward and the car would flip off the side of the ramp. Luckily, God sent angels from above in the form of 10 giant Spanish men. They all pulled over and jumped out of their cars. One man came to Jessica’s rescue and reached over her to put on the emergency brake. She squeezed out of the driver’s seat as he slid in.

The rest of the men actually LIFTED OUR CAR while the new “driver” steered back onto the ramp. He got the car onto the street below and turned around to pick us up. It was one of the most terrifying experiences ever and I’m sure Jessica will never drive in a foreign country again. But these men were amazing. We thanked them in Spanish and they just seemed to shrug it off and go about their business. 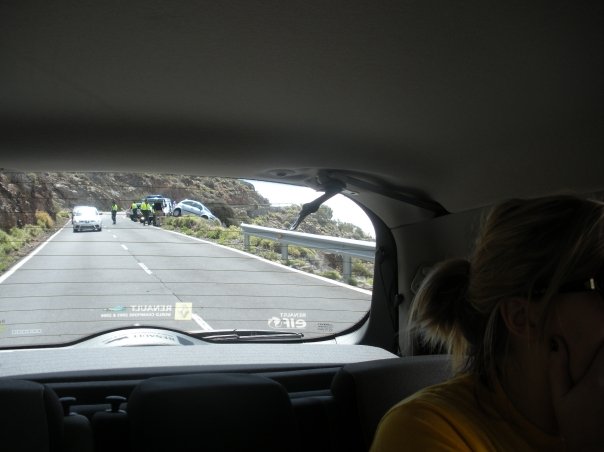 Maybe lifting cars is an everyday occurrence for them. When we finally arrived at the street that our hostel was on (after driving around in circles for another 30 minutes), we needed to find a parking spot. The only one we found was on a downward sloping road (again, 180°). Jessica tried to get it in the spot but we began slipping forward and nearly hit the car in front of us. Finally, she had had enough and we all walked away from the car thinking we would move it later when the person in front of us had left.

It was still parked in the middle of the road, about 2 feet from the curb. I even wrote a note in Spanish, using eye liner, asking the owner of the car in front of us to call my cell phone when he left. But just as we were walking away, this old woman who was watching us told us we couldn’t leave the car there because it would block the buses coming down the hill. I tried to explain that it was too difficult and we couldn’t park it without hitting the car in front of us.

So she calmly handed her purse to her husband, took our keys, marched over to our car, got in, parked it like an expert, and left without a word. So awesome!!! We didn’t touch the car for the rest of the trip. And when we had to head back to the airport, we made sure to ask for directions to the highway. I’ll never forget our near-death experience on the Tenerife volcano.

Carolyn is a young American woman who currently lives in Chicago,IL and counts the days to her next voyage. She has been more focused on exploring the US recently since she just finished my Masters degrees in Europe in 2009,  You can find her on her blog where she usually writes about her little life on my blog, http:\bonnecarolinebonnegamine.blogspot.com