I was sitting around Rio De Janeiro and I suddenly realized that I was leaving in a few months and hadn’t seen the majority of the country. I had been acclimating to life in Rio De Janeiro for close to 3 months already and was able to visit Easter Island, Peru, and parts of southern Brazil.

I couldn’t possibly leave the country and not see northern Brazil.

I was able to already see Salvador, Brazil, thanks to carnival in 2011, but I haven’t been able to see the rest of the country.  One of the things that many people don’t realize is how big Brazil is, it is the 5th largest country in the world by area and population according to the CIA fact book.

Most times when people think of a country they only think of it as a whole, an example would be Brazilian culture.  While there are many similarities throughout the country the cultures of the north and south are miles apart from each other.    Even the culture in Rio De Janeiro is unique, strangely similar in comparing what Buenos Aires means to Argentina.

For the most part, the south is more European while the north tends to be more African and indigenous. 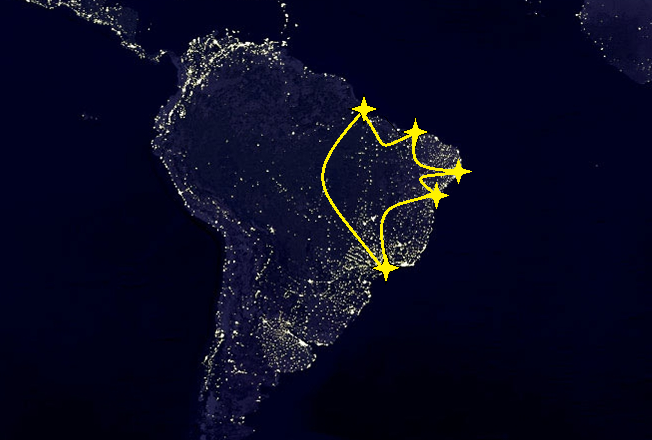 My trip through the entire norther coast of Brazil

One of the other things that many people don’t realize are the amount of things to see and do Brazil.  There are only a handful of countries that have everything to see from a tourist’s standpoint, United States & Argentina are two that quickly come to mind.

India for example, has everything that a tourist could ask for culturally (one of the reasons why I just submitted my visa for the country as your reading this and plan on spending up to 6 months there)

The country has so much more to offer and many people won’t ever discover the country outside of the southern coast.  I wanted to see every single part of the country bus sadly, things didn’t work out the way I wanted.

Now I have more reason to return to Brazil!

While my original plan when moving to Brazil was to try and see the entire country, my business has been exploding unexpectedly,  especially my day trading education business, The Day Trading Academy.

My focus was to try and align things the right way then so I could travel more later by doing more work while in Brazil. With all of the things I am involved in, you can’t work and travel at the same time. Usually you have to pick one or the other.  What I planned to see were some of the most unique things to see in Brazil, if not in all of South America.

Now that I have completed this trip I will be able to focus on smaller segments in Brazil that I still want to see but wont be able to see on this trip.  Having the ability to live in Rio De Janeiro for close to 6 months I was able to explore the city and its surrounding area in great detail. Someone could easily spend a year or more experiencing Rio, its an incredible city.

Some of the places that I plan on returning to see are: