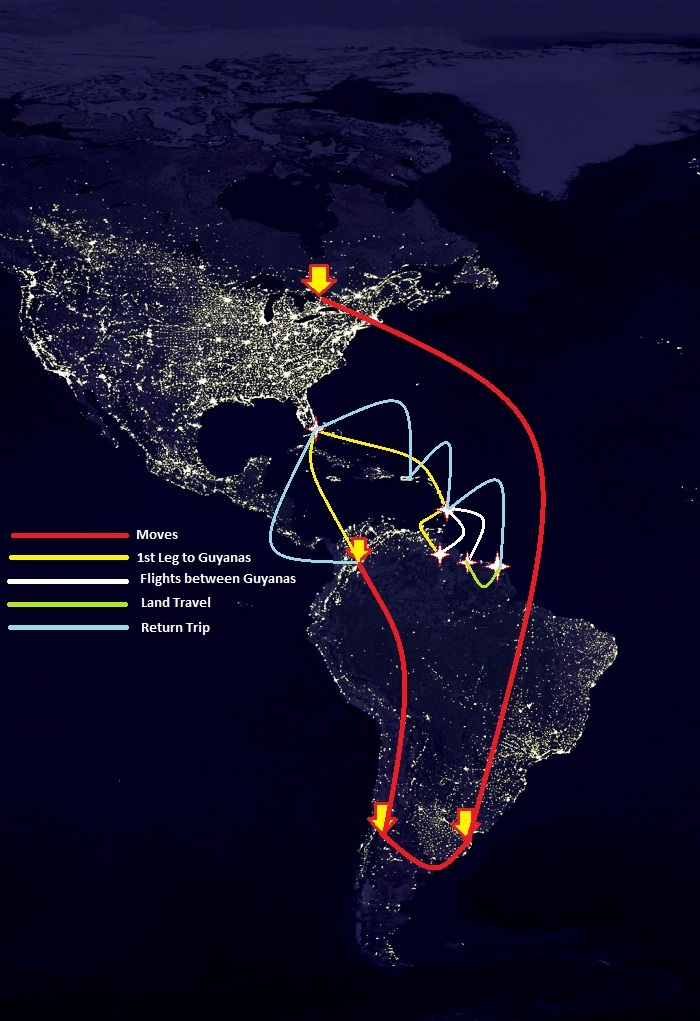 From the start of my (endless) around the world trip I had one goal; to do everything. I started in Canada just to get the feeling of being overseas and then I promptly jetted to Argentina, Chile, and now I currently am living in Colombia.

The whole goal was to finish South America before I headed east and conquered Asia. Compared to most of South America, Chile is much less of a tourist destination than say Brazil or Argentina. The Guyana’s are probably the least visited countries in the region and since I don’t have any stats to back that up you should just take my word for it.

I have always been intrigued with the Guyana’s because there isn’t very much information about them.

These were outposts of nations; Suriname was Dutch, French Guyana is French, and Guyana was British.

Suriname and Guyana are the only two of the three that have broken off from the evil European empires and have gone independent. I can just tell this trip is going to be chaotic, like driving through the Bolivia countryside to see the Salar de Uyuni (for those of you that have been you know what I am talking about).

The story begins when I was trying to find a way to fly directly into one of the countries, preferably French Guyana or Guyana so I could go from one corner to the other. (Who takes the bus these days? pshh) Luckily for me there was no way to fly into the countries from Colombia so the search began. In order to fly into French Guyana you have to fly via Air France or Air Caraibes. There are no direct flights with any other airline from any other city in the world, except France of course. I was actually tempted to fly from Colombia, to Paris, and then back to French Guyana. Who wouldn’t right? You only need 3 days for the connections.

The only problem is that in order to get a connection back to Colombia you have to visit every island in the Caribbean. There were literally 7 or 8 connections with Air France to get back home to Medellin, see the picture below.

I did find many flights directly into Suriname from Miami but then came the next problem, there is no direct flight from French Guyana to Suriname or Guyana. I would basically be starting in the middle of the three and have to go to Guyana by land, come back by land, and then eventually fly or go by land to finish French Guyana. If I had the time I would be more than happy to stick it out, but with my day trading I need to make sure I have internet access to day trade.

If  a country doesn’t even have direct flights from each other what does that say about their internet? lol.

Not having internet access for 2 full days getting to and from French Guyana by land wasn’t going to cut it, especially when it would cost me a lot of money. I decided to find flights into Guyana, start there, and then head South East to Cayenne, French Guyana. 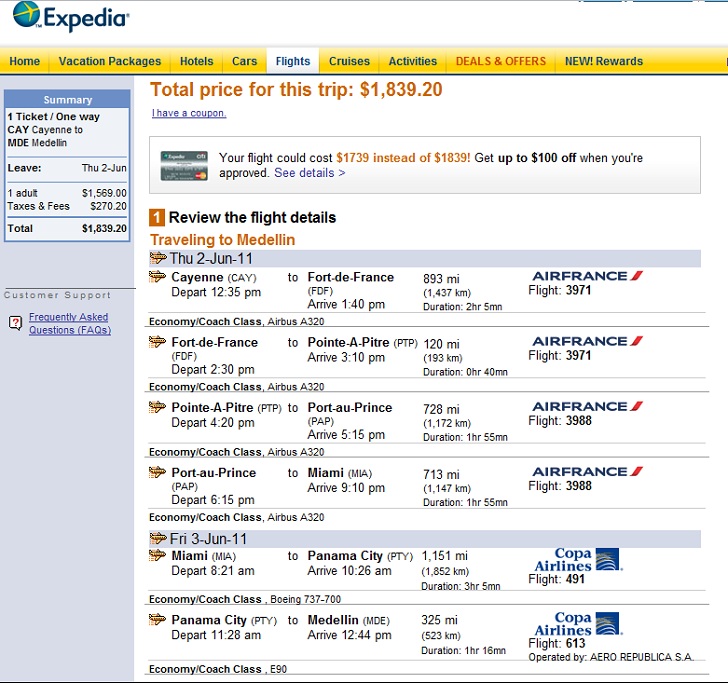 I would go by land one day and then fly out of Cayenne to one of the millions of island in the Caribbean and then head home. The fight then started to find a direct flight to Guyana, I heard Jesus bless me at this point. I looked up the variety of Caribbean airlines and found that there were direct flights from Port Au Prince, Trinidad & Tobago.

I was originally going to fly into Panama and spend some time there before I headed to Guyana.  With so much time being spent flying and traveling I decided I would go back and finish Panama later, after the US forced a military coup so they could control the canal it is just an extension of the United States isn’t? Jury is out on that.

My final itinerary has be going from Medellin to Port Au Spain and then into Guyana.

As mentioned before the Guyana’s don’t have any direct flights to each other so I have to fly from Guyana to Port Au Spain and then into Suriname.  I’ll be going via land into French Guyana since I don’t have time to fly to Mars and back to get the connection into Cayenne, French Guyana. It says a lot about these three countries when they don’t even have one flight that connects them, not even once a week.

It was originally thought that Bolivia and Peru were the most backwards countries in South America, we may just have a winner folks, wish me luck! Here is my itinerary below: