The Museum of Gold in Bogota, is one of the most visited tourist sites in Colombia, attracting around a half a million visitors annually. Locally known as the El Museo del Oro, it is a world class facility, with a fabulous assortment of gold artifacts, that remains the largest collection in the world.  It is our 11th stop in the ongoing travel series  A World Far And Away.

The National Geographic magazine published a list of the 16 best history museums in the world, the Museum of Gold, came in ninth place.

The Gold Museum has on display throughout the second and third floors, an incredible selection of pre-Colombian (before the Spanish conquest) gold and other metal alloys artifacts, that rival and surpass, the collections of other renowned sites.

The full assortment contains a total of 55,000 pieces, of which 6,000 are on display in the expanded facility, following a renovation in 2008.

The texts of the permanent exhibitions are provided in both Spanish and in English.

The history of the Museum of Gold can be traced back to 1934. It was when The Bank of the Republic  (Central Bank of Colombia) began to assist in the protection of the archaeological treasures of Colombia.

The first item in the now celebrated collection was the Poporo Quimbaya.   It is a ceremonial apparatus used for chewing coca leaves, during religious ceremonies. It was created around 300 C.E. by employing the method known as lost wax casting.

The Poporo Quimbaya is made of an alloy of copper and gold, that the Spanish have identified as tumbaga. It is now one of the most recognized pre-Colombian art pieces. It even has been depicted on Colombia’s currency.

This now famous artifact is believed to have been stolen from a burial chamber during the 1930’s.  The location is thought to be on Loma del Pajarito  “Birdie Hill” in Yarumal, of the Antioquia department of Colombia. 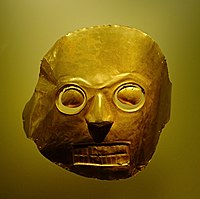 Grave robbing of indigenous burial sites, was a common occurrence back then. It often had the unfortunate consequence, of the destruction of other important archaeological artifacts and valuable information, in the pursuit of gold and other precious metals and gems.

To preserve it from destruction or have it leave the country to be sold abroad, the central bank purchased the Poporo Quimbaya. This soon led to a far larger project, for the preservation of similar objects of interest and historical value for the nation.

To house the growing collection, made through purchases by the bank, the decision was made in 1939, to establish the El Museo del Oro. This allowed items bought by the institution, to go on public display, with some items like the Poporo Quimbaya being viewed for close to 80 years.

In addition, to the gold and metal alloy artifacts, there is a wide variety of other objects made by indigenous cultures that pre-date the arrival of the Europeans. These include pottery, items made from shell, stone and wood, as well as textiles.

The Gold Museum also houses the legendary Muisca Golden Raft. Discovered in 1969, it represents the ceremony of the new zipa (ruler) of  Bacata. It forms part of the basis of the once international sought myth of El Dorado ( the city of gold).

The Golden Raft illustrates the transition of power, as the new ruler assumes his position amidst a offering to the gods. He is surrounded by other chieftains, all decorated with gold and feathers.

The major renovation that took place a decade ago, organized the permanent exhibition in five rather large rooms.  These are where tourists will find the most important objects on display and an interactive room.

The reconstruction plan has also allowed for the addition of an auditorium, a cafe, a restaurant, souvenir gift shop and some temporary exhibition rooms. 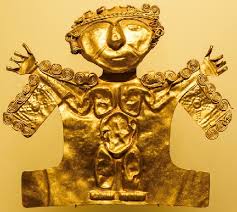 Exhibitions begin on the second floor. The main display room is known as the People And Gold In Pre-Hispanic Colombia. There visitors will see an amazing ensemble of historical artifacts from different cultures in existence before the arrival of the Spanish conquistadors and later colonists.

The permanent exhibition is divided into different corridors for each distinctive culture for a total of 13. These are the Calima, Cauca, Chocó, Malagana, Muisca, Nariño, Quimbaya, San Agustin, Tairona, Tierraadentro,  Tolima, Tumaco, Uraba and Zenu.   There is also a special room identified as Despues de Colon (After Columbus).

The exposition continues on the third floor. There is The Flying Chamanic which shows the process of a shamanic ceremony, with its assortment of gold pieces.

Another grouping is The Offering, which  is divided into three parts. These are the “Offering Room”, the “Offering Boat” and the “Lake”.

At the end of the exposition one can find a “Profunditation Room”. It contains artistic videos of the most important gold pieces found in the Gold Museum.

On the fourth floor is located the Exploratory, a room that promotes interactivity and reflection  around the diversity and meaning of the heritage, that the Gold Museum preserves.

The Gold Museum is located on the Parque de Santander, on the corner between Carrera 6 and Calle 16.

Coming from abroad, you would arrive at the Bogota Airport

Take public transport or rent a car to the Museum

The Museum of Gold offers free parking for two hours, but space is limited.

Sundays: There is no entrance fee.

Free entrance to those visitors who are under 12 and over 60.

You will need to obtain a ticket, even if your admission is considered free.

At the box office on the first floor, you will be offered audio guides in the following languages: Spanish, English, French and Portuguese. This will permit the visitor to view the artifacts at their own leisure. The rental price will be COP $8,000 ($2.55 USD)

The tours will last about 1:30 hours.

You will be expected to exit the museum, at least an hour after the closure time.

Will be closed on major holidays and election days.

Is available throughout the city of Bogota.