It seems it was just yesterday that I was just taking trips from the four weeks of generous “vacation” provided by my job over five or six years ago. There was a moment when I decided there was a completely different life I wanted to live.

A life that would be defined of what I consider success, my freedom.

Most of us go through a moment in life when were tired of watching a football game on Sunday or going to the mall on Saturday. Perhaps even going to the local pub and grabbing a drink every day after work.

While the routine is fun sometimes we need a bit of excitement. The possibility of seeing a picture in National Geographic and deciding to buy a flight the next day to that very destination was the life I wanted to lead.

On this current around the world trip I have visited over 50 countries and something along the lines of over 200 cities.

I’ve been lucky enough to do more things in the last six months alone that more people do in a lifetime.

I visited every country in Eastern Africa including Somalia, and even the newest country in the world, South Sudan.  I have seen and experienced nearly every tourist attraction in South America. The only major attraction missing is the Galapagos islands and a handful of cities in Ecuador. I visited my seventh continent in Australia and finally got a taste of Southeast Asia.

One of the most meaningful accomplishments that I have is actually getting to know the locals of each country I visit. I prefer to stay in the destination longer than most in order to really get a feel of the culture. I have actually lived in 12 countries spanning five continents.

Australia, I’m coming for you soon.

Instead of traveling from hotel to hotel and I rent and live overseas with furnished apartments.  This is all due to the requirements of my profession, day trading. It also allows me to travel the way that I love to.

There is only one option, experience.

This allows me to get to know cultures on a much deeper level than most.  I always try to find a local neighborhood and try to meet the locals and do what they do, experience with the experience, and honestly get upset when I realize I don’t have my American conveniences.

Traveling around the world has meant a lot of things and will mean a lot of things to a lot of people.  I think it calls attention of most because of the excitement and freedom that it brings. 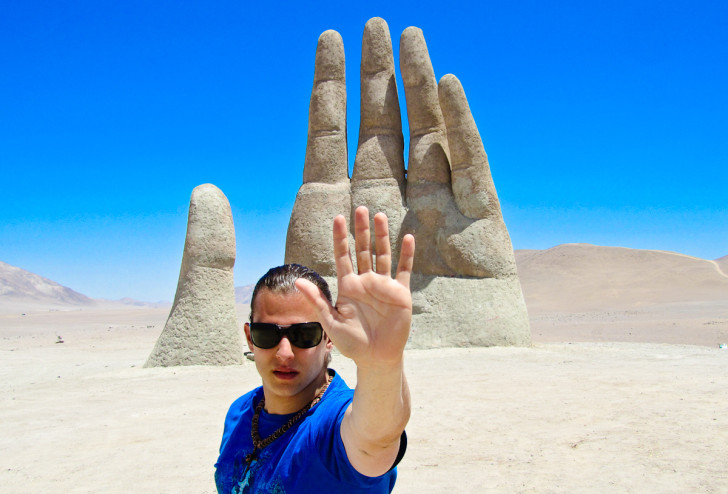 Marcello Arrambide at the hand in the sand Chile

I now have come full circle and have returned to Toronto, Canada, where everything began for me a few years ago.

I have a career and businesses I can run from an Internet connection anywhere around the world.  There was nothing holding me back from anything I wanted to experience.

I do remember the feeling of actually quitting my job.

The actual motion and fear of the unknown. The uncertainty of arriving at a destination that no longer knowing where things were or how to find them. It is that very thing that kept me tied to my job for so long.  If it wasn’t for the fear of the unknown I would have left my job years earlier.

I write this just to reflect on how my life has changed ever since I decided to live this new lifestyle. I know many continue to ask how it is possible that I do what I do. Unlike other people I do have a profession to fall back on but that is not what holds back most of people.

It really is the simple fear of letting go, the anxiety of the unknown.

I was making a great living not only at my job but also via day trading. I had saved up a significant amount of “emergency funds” were I didn’t have to think about making money anymore. I even had an extra source of income via day trading where I didn’t have to worry about making money either since I was able to do it every day.  I had achieved a level of consistency for a significant period of time where I knew I was sure I could make money.

And yet even with all that I was still afraid to go.

I know that it may be hard for most of us to open the door to the unknown. To close the door behind us and only see an endless road not knowing where it will lead.

Most of the travelers I know and have met always return home.  They always have the destination where their parents are based, or where they rented a basement to put their things, or the house they always return to relax and get caught up on things.  The place they grew up.

I have been lucky enough to find new homes as I continue to travel around the world.

An education at a four year university is part of the reason I was not living my dreams earlier. If an education is what one seeks then traveling around the world will prove to be the best education anyone  can spend money on.  I can attest to this by accumulating nearly $100,000 in student loans after they provided a paper I will never use in my lifetime.

Fear not the friends that one may or may not meet as there are things much worse in life than being lonely.  Sacrifice what you must in order to have a dream come true.  If you are open and friendly believe that a family will be found, local or tourist is relative.

If you don’t follow your dreams then they are not going to come true.  Have faith that the world will unfold the way it’s meant to.

But if you don’t take the first step then nothing we want in life will ever get started.