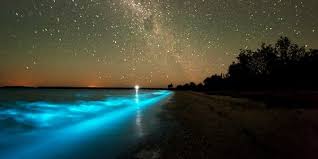 The island of Vieques, in Puerto Rico, features the brightest bioluminescent bay in the world. The magical quality of this natural wonder, makes a visit here almost obligatory, to those who wish an almost other worldly experience. Mosquito Bay, provides the 29th stop in the travel series Off The Beaten Path.

The luminescence of Mosquito Bay is caused by a microorganism, the dinoflagellate which creates a glow in the water, when it is disturbed. It leaves a near supernatural trail of neon blue, as one passes.

Other famous locations for bioluminescent bays are in Jamaica, the Maldives and Vietnam. 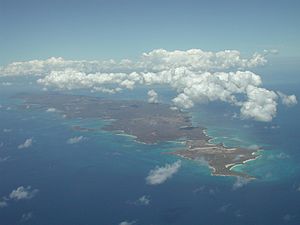 Vieques from the air, looking west.

As part of the island group referred to as the Spanish Virgin Islands, Vieques can be found 8 miles (13 kilometers) east of the Puerto Rican mainland. The island itself, measures 20 miles (32 kilometers) long and 4.5 ( kilometers) miles wide.

Vieques beaches have been identified, as among the top 25 best in the world. Along with snorkeling, and a number of archaeological sites, including a museum, what sets the island apart, is the presence of two pristine bioluminescent bays, with Mosquito Bay being the most spectacular.

Specific conditions must exist for bioluminescence, which includes a complete lack of modern development, which is clearly the case around Mosquito Bay. 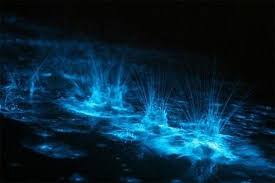 Mosquito Bay also known as the Bio Bay, locally Puerto Mosquito, is considered the best representation of a bioluminescent bay in the United States. It is presently listed as a national natural landmark.

In 2008, the Guinness Book of World Records declared Mosquito Bay, as having the brightest recorded bioluminescent water, anywhere in the world.

The water must also be cool and deep enough, with only a small channel, connecting the bay to the ocean. This provides some protection for the dinoflagellate, from the more vigorous wave action outside the bay. 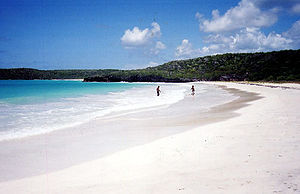 It must be noted that the channel itself, is an artificial creation. Early Spanish explorers wanted to choke the bay off from the ocean. To achieve this end, they dropped huge boulders in the channel. This was due to the fact, that they believed the bioluminescence they encountered, was an act of evil and could be attributed to the devil.

In reality, they actually enhanced conditions for the bioluminescence. By isolating the bay, even further, the Spanish preserved the area and helped increase the numbers of dinoflagellate.

In the case of Mosquito Bay, red mangrove trees surround the water. It is not necessary to the survival of the species, but seems to enhance their abundance. 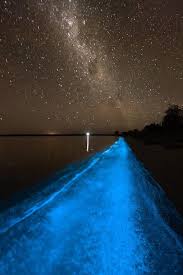 In Mosquito Bay, there is supposedly more than 750,000 dinoflagellate per gallon of water. This is the highest concentration anywhere in the world.

It is the result of the proper salt concentration of the water and the mangrove roots. This combination provides the ideal environment, providing both food and protection to the microorganisms.

One historical anomaly, that contributed to the lack of development on the island, was the fact that for sixty years, the majority of Vieques was controlled by the United States Navy. This has been a boon for travelers, looking for a place that is absent of traffic noise and the bustle of cities.

To view this amazing sight, one will need to employ the services of a tour guide. This travel writer recommends contacting a company that uses glass bottom kayaks, which will magnify your experience.

The paddle of the kayak will create a trail of luminescent blue, as it continues to break through the water. The fish that swim in the bay, will look like they are glowing from the kayaks. To fully appreciate the outing, be sure to dip your hand in the water and watch it shimmer.

The best time for viewing Mosquito Bay is during a “New Moon” phase.

Located on the southern shore of Vieques, Mosquito Bay can be reached by ferry from Fajardo, on the main island of Puerto Rico.

Tour companies typically provide transportation to the bay, from the island town of Esperanza.

Although there are a number of tours available, it is better to go with a firm that provides for smaller groups, of only 6 to 8 participants. This will allow you to better appreciate, the natural beauty of the bay.

Tours usually do not operate the day before, during and after the full moon, since the luminescence of the bay, will be muted.

Days and Hours of Day Operations

Tours take place throughout the year upon nightfall and continue well into the night.

Tours run for about 2 hours, including the transfer to the bay and back.

Night time tours will require travelers to remain on the island, at least overnight.

Tour companies are usually more than willing, to provide suggestions for hotels or guest houses.