How a monastery built during the 12th century in Spain, would end up being one of the oldest buildings not only in Florida, but in the Western Hemisphere is an unusual tale.

It provides the Church of St. Bernard de Clairvaux an unusual history, in the path to become the tourist attraction known as the Ancient Spanish Monastery. It provides the story to our 9th stop, in the series Off The Beaten Path.

The monastery of St. Bernard de Clairvaux was begun in 1133 CE in Sacramenia. The area is located in the northern part of Spain, near Segovia.

After eight years of construction, the monastery was dedicated to the Virgin Mary in 1141 CE. The original name was The Monastery of Our Lady, Queen of the Angels.

The monastery was founded by Alfonso VII of Castile and Leon. It was built in the traditional Spanish style, of Cistercian Romanesque architecture. After its completion, he would have it occupied by Cistercian monks who had come from France.

When Bernard of Clairvaux was canonized in 1174 CE, the monastery would be renamed in his honor.

St. Bernard was a Cistercian monk and mystic. He was the founder and later abbot of the Abbey of Clairvaux, Bernard. Over time, he became one of the most influential Roman Catholic church leaders of the early to mid 12th century.

Some parts of the monastery were rebuilt, after being destroyed by fire in 1641.

Cistercian monks would occupy the monastery, for nearly the next 700 years.

The abbey would remain an active monastic community until 1835.

Due to the social revolution of the 1830’s, the Monastery of St. Bernard de Clairvaux along with other cloisters, would be confiscated and sold. It would happen during the reign of Queen Isabella II of Spain.

The historic monastery building, would be converted into a stable and a granary. The Romanesque abbey church, remains one of the monuments of Sacramenia.

In 1925, newspaper magnate and publisher William Randolph Hearst, purchased the Cloisters and the monastery’s outbuildings.

The structures would then be dismantled stone by stone and packed with protective hay. It would take more than 11,000 wooden crates, that were numbered for identification purposes. The entire lot was then shipped to the United States. Some of the crates weighed over 3,000 pounds each.

An outbreak of hoof and mouth disease in Segovia around this time, resulted in the entire shipment being forced into quarantine, upon its arrival in the United States. Some of the information contained in the labeling process, was thus lost.

During the process of quarantine, the crates were opened and the hay filing was burned, as a measure to prevent the possible spread of disease. During the repacking, the items in the crates were not replaced correctly.

By this time William Randolph Hearst was unable to proceed with his plan, to reassemble the monastery, at his San Simeon estate along the California coast. Financial difficulties now made the venture no longer viable.

As a result, most of the collection would be sold at auction. The thousands of crates would then remain in a Brooklyn, New York City warehouse for the next 26 years.

Central courtyard surrounded by the cloisters.

In 1952, the year after the death of Mr. Hearst, the crates would be purchased by Raymond Moss and William Edgemon. Their plan was to reassemble the monastery and create a tourist attraction, on the site of a small plant nursery in northern Miami, Florida.

The crates would be shipped to the Port of Everglades in 1953.

It would then take 19 months and would cost $1.5 million USD (United States Dollar), to assemble the pieces for reconstruction. This is the equivalent of nearly $20 million USD in modern day cost, to put the monastery back together again.

Entrance to the cloisters.

Interestingly, some of the original stones would remain unused, in the process of rebuilding.

A 1953 Time Magazine article, would call it the biggest jigsaw puzzle in history.

Edgemon and Moss would take charge of the reconstruction in 1964. They together decided to add other decorative pieces, from different Spanish buildings to the original complex.

One of the most prominent additions, was the large round carved-stone coat of arms, seen in the cloister. This artifact had originally belonged to the House of Albuquerque and came from the monastery of San Francisco de Cuellar, also in the province of Segovia.

Another acquisition for the monastery, was the chapel that had been erected in the 15th century, by Beltran de la Cueva, the 1st Duke of Albuquerque. He has been a favorite of Henry IV of Castile. This also had been sold in the 20th century, after the secularization of the monastery. 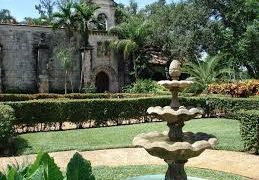 Also later in 1964, the property would be purchased by Bishop Henry I. Louttit, for the Episcopal Diocese of South Florida. The geographic area encompassing the one Diocese, would soon be divided into the Central, Southeast and Southwest Florida.

Eventually financial difficulties, would force the three dioceses to sell the monastery.

Colonel Robert Pentland, Jr., who was a multimillionaire banker, philanthropist and a benefactor of many Episcopal churches, purchased the Cloisters. He would then present them to the Bishop of Florida, for the Episcopal parish of St. Bernard de Clairvaux.

Three doors from the monastery would be removed and are now in a private home located in Atlanta, Georgia.

The monastery is listed on the United States National Register of Historic Places.

Today, the parish Church of St. Bernard de Clairvaux is an active and growing congregation. It is located in the Episcopal Diocese of Southeast Florida.

Church services are held regularly on Sundays and weekdays, in both English and Spanish.

The e-mail address is Info@SpanishMonastery.com

Visitors should note, the church and gardens do close for special events. Weekends are the most popular time for such occasions.

Is available in nearby communities, surrounding the monastery and other nearby attractions.