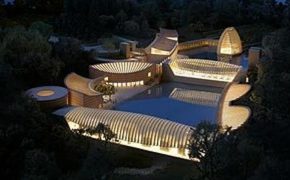 Overview of Crystal Bridges Museum in the evening.

The third stop in Off The Beaten Path returns us to northern Arkansas, just north of the Ozark National Forest, to one of the most impressive museums built in the last generation. Crystal Bridges has become a colossus in American Art, where travelers can see paintings that provide an unique historical experience.

Our first stop in our series was at Blanchard Caverns, which is 167 miles to the east of Crystal Bridges. One can easily traverse this distance in about three and a half hours.

Crystal Bridges is the first major art museum (over $200 million endowment), that has opened in the United States since 1974.

This jewel of American Art History, can be found in Bentonville and was the inspiration of Alice Walton. She is the daughter of Sam Walton, founder of the American based conglomerate known as Walmart.

Over $317 million of the total project’s cost has been donated by Alice Walton.

By August 2008, a little more than three years before the grand opening of Crystal Bridges, the museum had amassed $488 million in assets.

Crystal Bridges can be found nestled on a 120 acre property, amidst some 500 dogwood trees and is within walking distance, from the nearby town of Bentonville.

Approximately 300 people are employed with the museum. Annual operating expenses run between $16 and $20 million. 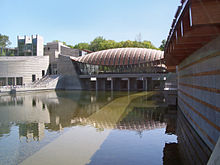 Pavilion of restaurant “Eleven” with the main lobby building and 19th-century galleries at left.

The complex designed by Moshe Safdie and engineered by Buro Happold, opened on November 11, 2011. The site offers access to an outstanding art collection that spans several centuries.

The emplacement of the museum is around two creek-fed ponds. A series of glass pavilions comprise the galleries, meeting rooms, classrooms, library, restaurant, coffee bar and gift shop. Including the sculpture garden, the complex encompasses 217,000 square feet or 20,200 square meters.

On the grounds, there are outdoor areas for concerts, public events and extensive nature trails.

Art historian John Wilmerding was hired in 2005, to provide advice and assistance with the acquisition of major works. He was later able to comment, that Crystal Bridges can be ranked, at least in the top half dozen of American art museums. 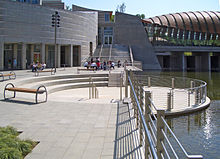 In August 2009, Don Bacigalupi would replace Robert G. Workman, as director of the museum. In early May 2011, Crystal Bridges was able to announce three additional endowments by the Walton Family Foundation totaling some $800 million.

These gifts were made to provide the museum the funds necessary, for operating expenses, capital improvements and of course, future acquisitions. The endowment for additional purchases of art alone, totals $325 million.

The galleries house a permanent collection collection of art works from American masters. It includes individual pieces from the colonial era, to the modern day.

Portrait of George Washington (The Constable-Hamilton Portrait, 1797) by Gilbert Stuart.

There are periodic touring of other famous paintings from national art institutions. The temporary exhibitions program, provides a wonderful compliment to the permanent pieces.

Examples of this collaboration include the Louvre in Paris, High Museum of Art in Atlanta, Georgia and the Terra Foundation for American Art. The partnership beginning in 2012, allowed the American Encounters exhibition to be seen by countless visitors.

Some of the most famous paintings owned by Crystal Bridges include the masterpieces of George Washington created by Gilbert Stuart and Charles Wilson Peale. The latter was acquired in 2004, for just over $6 million.

One can also find Asher Brown Durand’s Kindred Spirits, purchased for more than $35 million from the New York Public Library and the celebrated Rosie the Riveter, painted by Norman Rockwell.

In 2012, the museum bought a major work, a 1960 painting by Mark Rothko from a private Swiss collection. Before then, the painting had only been displayed in public twice.

Some of the most important acquisitions over the years include Green River, Wyoming by Thomas Moran in 2002, for the sum of $2.9 million. Robert Louis Stevenson and his wife by John Singer Sargent in 2004 for $8.8 million and Portrait of Anne Page by Dennis Miller Bunker also in 2004, for $3.6 million.

There are numerous others historical artists, whose works are represented as well.

Sculptures are displayed prominently throughout the galleries. Represented in the permanent collection include works by Paul Manship, Roxy Paine, Mark di Suvero and James Turrell.

In 2015, the Crystal Bridges Foundation was fortunate enough to acquire Frank Lloyd Wright’s Bachman-Wilson House. It was taken apart in New Jersey and reassembled on the museum grounds. Solar powered shuttles provide transportation for visitors to the building and admission is free.

Crystal Bridges Museum is located at 600 Museum Way, Bentonville. Arkansas 72712. Their phone number is (479) 418-5700. The website for online information is crystalbridges.org

If you are arriving by plane, the closet commercial airport is into Northwest Arkansas Regional (XNA). Rental cars and limousines are available for tourists.

The facility is closed on Tuesdays.

* They are closed on Thanksgiving and Christmas.

There are no admission fees for the museum permanent collections or for parking. However, there are occasional ticket fees, to pay for special exhibitions.

Is available in the town of Bentonville and nearby communities.