Arches National Park contains the highest density of natural sandstone arches in the world. More than 2,000 of them can be found inside this American geological wonder. Located in eastern Utah, the park contains an incredible abundance of unique rock formations. It is our 24th stop in the United States based travel series Off The Beaten Path.

The park is expected to receive some 1.8 million visitors in 2018.

A paved scenic drive, allows visitors to see the major viewpoints that are present within the park. For those individuals who wish for a more personal and in depth experience, there are numerous pathways to the most famous sites.

Hikers can choose from a wide variety of trails, from short 20 minute jaunts that lead to the largest arches in the park, to far more adventurous tracks. These can take hours to complete and lead into areas seen far less, by most tourists.

Incredible rock formations have brought visitors to the area that encompasses Arches National Park for decades. It became a national monument in 1929 and was re-designated as a national park in 1971.

Arches National Park is adjacent to the Colorado River, just 4 miles (6 kilometers) north of Moab, Utah. Located in the high desert of the Colorado Plateau, the lack of rainfall (less than 10 inches annually), affords tourists some views of sandstone features, that are quite unique.

The lowest elevation of the park at 4,085 feet (1,245 meters) is actually at the visitor center. The highest point is at Elephant Butte, the ascent here is 5,653 feet or 1723 meters. This allows a majority of travelers to the park, an ability to traverse the area, without too much difficulty.

The creation of the various rock formations, is due to the fact that the park lies above an underground evaporite layer, known as a salt bed. It was laid down, when the area was part of an inland sea, some 300 million years ago.

The region was then covered with debris, that is today identified as Navajo Sandstone, followed by the Entrada Sandstone. The arches themselves, are mostly comprised of the latter.

Erosion and time allowed faulting in some areas and uplifting in others. The partial liquefaction and movement of the salt bed below, permitted the shaping of the present landscape.

The major formations that can be seen today, are the product of both water and wind erosion.

There has been human activity in the area, for at least 10,000 years. The Fremont and Ancient Pueblo occupied the area, until about 700 years ago. These were replaced by the Paiute and Ute people, who were living throughout the region, when Spanish missionaries arrived in 1775.

The first European- Americans arrived in 1855 and attempted to settle the what is known as the Mormon Elk Mountain Mission, but the place was soon abandoned.

Later endeavors came in the form of farmers, ranchers and prospectors. In the 1880’s they put down roots in Moab and the neighboring Riverine Valley.

The Organ, a sandstone tower in the Courthouse Towers area.

It is at this point, that the beauty of the area that was to become Arches National Park, became more well known. Some individuals began to think, that the unusual rock formations might attract visitors and would result in a tourist trade.

The problem remained in the isolation and difficulty in reaching, this part of the United States. The solution would present itself, with the arrival of the railroad.

Frank A. Wadleigh, passenger traffic manager of the Denver and Rio Grande Western Railroad accompanied by company photographer George L. Beam, would visit the area in 1923. 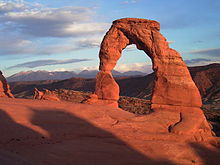 The pair were invited by Alexander Ringhoffer, a prospector. Ringhoffer has written the railroad about the various scenic areas, he had discovered with his family.

Wadleigh was impressed enough to contact the Park Service and suggest creating a national monument.

Designation of the area as a national monument was supported by the Park Service, but was resisted by Interior Secretary Hubert Work in the Administration of President Calvin Coolidge.

Frank “Boss” Pinkley – in charge of the American Southwestern National Monuments in 1934.

However, the election of Herbert Hoover would change the dynamic and in April of 1929, a presidential proclamation created the Arches National Monument. Of course at the time, it consisted of just two comparatively small, disconnected sections.

The name Arches was put forth by Frank Pinkely, superintendent of the Park Service’s southwestern monument, following a personal visit there in 1925.

President Franklin D. Roosevelt would enlarge Arches in 1938. He also authorized the development of a number of facilities to promote tourism.

Before leaving office in 1969, President Johnson signed a proclamation that substantially enlarged Arches. In 1971, President Nixon would sign legislation passed by the United States Congress, which significantly reduced the total area of the monument, but changed its status to a national park.

There is also an abundance of indigenous animal, bird, reptile and plant life, throughout the park, that visitors are often likely to see.

Most tourists will drive the 36 miles or 58 kilometers round trip Scenic Drive. This can easily be done in a few hours, with stops along the way for viewing and some picture taking opportunities.

In a half of a day, a visitor can do the Scenic Drive and some of the easy short trails in the park. Suggestions for the latter include the Park Avenue Trail and trails in the Windows Section of the Park.

If a tourist is able to spend the entire day in the park,suggested extensions include trails to Delicate Arch, Double O Arch, Landscape Arch and Tower Arch.

Balanced Rock with a size of 3 buses.

If one is staying for a number of days, there are numerous paths one can follow, to find more isolated by equally impressive sites, throughout the park. These can take up to four or five hours each.

If one wishes to camp within the park, reservations can and should be made, up to six months in advance from March 01 to October 31. For the rest of the year, it is on a first come first served basis.

(Phone service is closed on most public holidays)

$30 USD per vehicle. The pass is good for 7 calendar days.

Days and Hours of Park Operations

The visitor center hours, will vary according to the season.

Commercial tours are available for those tourists, who are more comfortable with this option. There are eleven reputable companies, to choose from and are all available in Moab.

Is available in Moab, just a few minutes from Arches National Park.

Helpful Hints (If one plans to do any hiking on the trails).

A panoramic view of the Tower of Babel in the Courthouse Towers area.