The International Spy Museum in Washington D.C., houses the largest collection of international espionage artifacts on public display. The facility which opened in 2002, is dedicated to the trade craft and contemporary role of spying. The permanent aggregation, provides the complete history of espionage from ancient times, to the present day. It is the 23rd stop in the travel series Off The Beaten Path.

The International Spy Museum is the only public installation in the United States and the only one in the world, to provide a global perspective on a profession, that has shaped history and continues to have a significant impact on international events.

Many of the 750 objects on display, have not been seen publicly before. The artifacts illuminate the articulate work of a number of famous spies and crucial espionage operations.

The museum brings to life, the strategies and techniques of the individuals, behind some of the most secretive espionage missions, in world history.

The International Spy Museum was built and founded by Milton Maltz and The House on F Street. L.L.C. At a cost of close to $40 million USD (United States Dollar).

It was first conceived in 1996 and would finally open, some eight years later.

Milton Maltz was a codebreaker during the Korean War. He would later found the Malrite Communications Company in 1956. The name was later changed to the Malrite Company, which Maltz ran as CEO, until it was sold in 1998.

The Malrite Company provided half of the foundation cost of the International Spy Museum.

The other $20 million USD came from the District of Colombia, through TIF bonds and enterprise zone bonds. The museum is part of the ongoing rejuvenation of the Penn Quarter in Washington D.C. The effort was begun in the 1980’s, by the Pennsylvania Avenue Development Corporation .

The exhibits are displayed over 20,000 square feet or 1900 square meters, supported with historic photographs, interactive displays, film and video. 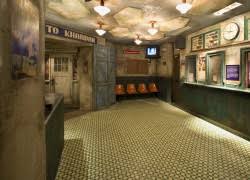 Inside the International Spy Museum 1

The permanent collection provides visitors with a wealth of information, that chronicles the history of espionage from the classical period of Greece and Rome, the American Revolutionary War and Civil War eras and the British Empire.

There is also an abundance of artifacts from both World Wars through the Cold War.

Tourists will begin their experience with Covers & Legends, by adopting a cover identity and learning why an agent would need one. Upon the completion of this procedure, they are then led into the Briefing Room. Here one is introduced to the real world of espionage.

Another exhibit is the School for Spies. This part of the museum provides an introduction to the trade craft of espionage and identifies many of the skills and instruments essential, to become a spy.

Inside the International Spy Museum 2

It goes further into exploring the various motivations, that lead individuals into this clandestine world. It investigates how they are recruited and trained, as well as how they operate in their profession.

There are a series of galleries known as The Secret History of History. This section of the museum gives an account of the history of spying, from biblical times to the early 20th century.

It chronicles the institutionalization of spying in the early years of the Soviet Union. It also traces the rise of espionage technology. There is a revelation of some historical figures, that most people are totally unaware, were involved in spying.

Prime examples would be George Washington, the first elected president of the United States, another one is Daniel Defoe, an English writer. He was the author of the popular novel Robinson Crusoe, the second most translated work, after the Bible.

Spies Among Us is a series of exhibits, films and videos, that give a detailed examination through World War II, that provides real-life spy stories.

This section of the museum also explores the role of code-making and code breaking operations.

Another part of the museum is the 21st Century. These exhibits focus on the challenges facing the intelligence personnel, in the 21st century.

These issues are addressed in the film Ground Truth. The growing threat of Cyber War is dealt with, in the film Weapons of Mass Disruption.

In 2009, the International Spy Museum began the interactive display called Spy In The City. Visitors are given a GPS type device and are then directed to find clues near various landmarks, in the area surrounding the museum. The purpose of the clues is to help fulfill a supposed mission, that involves obtaining a password for a clandestine weapon.

There are a number of special exhibitions at the museum. The newest interactive exhibition known as Exquisitely Evil: 50 Years of Bond Villains,opened in 2012. It was to celebrate a half a century of the James Bond franchise. It provides a detailed focus on 007’s most infamous adversaries.

Inside the International Spy Museum 3

Another interactive exhibit is called Operation Spy. Visitors to the museum are asked to assume the role of covert agents and proceed to engage, in a one-hour Hollywood type spy simulation.

Participants are asked to move from one area to another, and are subsequently given various tasks to solve, with puzzles, motion simulators, sound effects and video messages.

The players are given the opportunity to work through a mission, involving the interception of a secret arms deal, involving a nuclear trigger. This exhibition has a separate admission fee and separate entrance from the museum’s permanent exhibits.

About 600,000 tourists visit the museum on an annual basis. The exhibits are a self guided tour. Most visitors will spend about two hours viewing the exhibits.

If you wish to add an experience like Operation Spy or Spy in the City, plan on an additional hour at least. These interactive programs can easily sell out, so it is advised to purchase them in advance.

There is a wide range of cultural and educational programs offered to adults, students, and entire families. These are provided through book signings, films, scholarly lectures, tour packages, hands on workshops, and other special events throughout the year.

The International Spy Museum’s 5,000 square foot space, features a diverse selection of items that provides a wide variety of merchandise. The items listed for sales, mirror those seen in various exhibits.

At present, construction of a new permanent home for the International Spy Museum is underway in Southwest, Washington D.C. It will be completed in 2019 and will be a permanent cultural addition at L’Enfant Plaza.

The International Spy Museum is located in Washington D.C. in Penn Quarter.

Children age 6 & under are free.

The facility is closed for Thanksgiving Day, Christmas Day and New Years Day

Is available in the surrounding city and nearby communities.