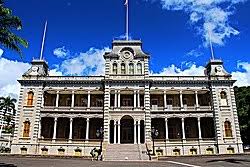 Iolani Palace located in Honolulu, the capital of Hawaii.

The Iolani Palace in Honolulu,was built in 1879 during the waning years of Hawaiian independence. Built in the American Florentine architectural style, this historic building is the only true palace, that exists in the United States. It was the royal residence of the Kingdom of Hawaii, during the latter part of the 19th century. It is our 12th stop in the travel series Off The Beaten Path.

Iolani Palace is the hallmark of the Hawaiian Renaissance Architecture. Thomas J. Baker would design the structure, Charles J. Wall would add ornate details and the architect in charge of the project, would be Isaac Moore. It was built of brick, with a concrete facing. The Palace features architecture seen nowhere else in the world.

This former royal residence was designated a National Historic Landmark in 1962, and the National Register of Historic Places listings in Oahu in 1966. 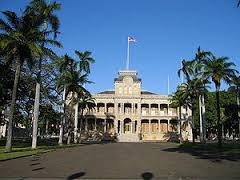 Upon completion of the Iolani Palace in 1882, the building would play a crucial role in the last years of the Hawaiian monarchy. Official functions would be held there and diplomats were received, for a royal audience. The entertainment provided at the palace, was often lively and quite lavish.

The present building replaced the original palace on the site, that had been known as the Hale Ali’i’s, built earlier in the first half of the 19th century. The name would be changed to Iolani Palace and during the time of its existence, was the grandest house in Honolulu.

The original Iolani Palace, the grandest house of its time in Honolulu.

The earlier palace had been built by Mataio Kekuanaoa for his daughter Princess Victoria Kamamalu. By the time David Kalakaua ascended to the throne, the original palace had suffered serious deterioration. The building had endured significant termite damage.

He would order the old palace to be taken down in 1874. It had housed the first five Hawaiian kings.

King Kalakaua was the first Hawaiian monarch to travel around the world. During his tour of Europe, he observed the magnificent palaces and castles of the continent’s royalty. He became quite determined, to build a residence fitting his position as king. 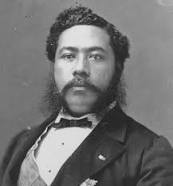 The new Iolani Palace was completed in 1882. The total cost came in over $340,000 USD (United States Dollar). In today’s valuation, that would be over $7.5 million USD. It was considered an enormous sum for the time.

The unique structure created in American Florentine, features a grand hall facing a staircase of Hawaiian koa wood. This indigenous wood was also used to make a piano, where Queen Liliuokalani played various musical compositions for her guests. 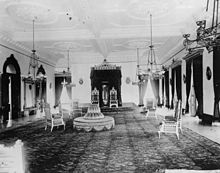 There was a throne room located in the southeast corner of the building, a blue meeting room where one would find the famous piano and a large dining room, that adjoined the hall.

Ornamental plaster was used throughout the building.

Upstairs there was a private library and the personal rooms for the royal family.

Iolani Palace was installed with both electricity and telephones. This occurred before the White House,home of the American President, was similarly equipped. 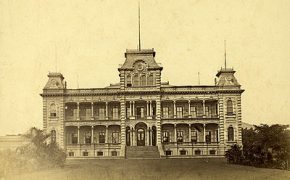 The palace shortly after construction in 1885.

The palace would remain the official residence of the monarchy of Hawaii until 1893.

American residents living in Hawaii, would engineer the overthrow of the monarchy that year. Shortly thereafter, not only Queen Liliuokalani, but the entire family and all their retainers, were forced to leave the palace.

The Committee of Safety responsible for the coup in 1893, would form the Provisional Government of Hawaii. Troops from this new regime, were sent to occupy the Palace.

Liliʻuokalani and Queen Kapiʻolani at Queen Victoria’s Golden Jubilee in 1887.

Within a few months government offices moved in and the building itself, was renamed the Executive Building, for the Republic of Hawaii.

Officials of the new government then carefully, made an inventory of the contents of the entire building. Thereafter, public auctions were held to dispense of whatever furnishings and furniture that were deemed unsuitable, for normal government operations.

There was an failed effort to restore Liliuokalani to the throne. In the endeavor to round up leading conspirators and their supporters, the question was raised if Liliuokalani herself was involved?

The government allegedly found a number of arms and ammunition at Washington Place, where the former Queen was now residing. In addition, supposedly evidential documents were discovered, implicating her in the failed plot. 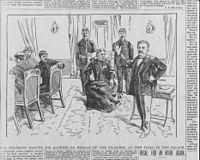 Newspaper depiction of the trial of Queen Liliuokalani.

Queen Liliuokalani would be returned to the former palace, following the failed counter revolution as part of the Wilcox Rebellions in 1895.

She would remain imprisoned for a total of nine months, in a small room on the upper floor. A quilt that she created during her time of confinement, can still be seen there.

During this time of captivity Queen Liliuokalani would abdicate the throne, in return for the release and commutation of the death sentences, that had been handed out to her jailed supporters. 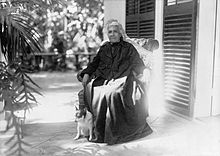 The subsequent trial of the former Queen, would take place in the onetime throne room. Although she would claim ignorance of the plot, she was convicted and sentenced to five years of hard labor in prison, by the military tribunal. She was also fined a total of $5,000 USD.

Her own sentence would soon be commuted, to imprisonment at the former palace. The following year, she was granted a full pardon and her civil rights were restored. She would later die in 1917.

The territorial governor would accord the former Queen, the honor of a state funeral in the onetime throne room. Her death brought to an end, this era in Hawaiian history. 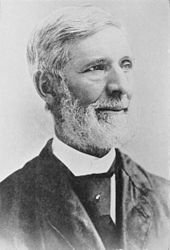 John L. Stevens, an American diplomat, conspired to overthrow the Kingdom of Hawaii.

The former palace continued to play a vital role in the political intrigues, that happened in the run up to the eventual annexation of Hawaii, which finally occurred in 1898.

The building would serve as the capital of the Territory of Hawaii and the temporary military headquarters of the islands during World War II.

The Hawaiian soldiers of Japanese ancestry, the core of the now famous 442nd Infantry Regiment, were all sworn in during a mass ceremony, on the grounds of the former palace.

During the government use of Iolani, the former second floor royal bedroom became the governor’s office. The first floor would house the legislature. Representatives would meet in the former throne room and the Senators in the former dining room.

In 1930, the interior of the former palace was remodeled. The wood framing would now be replaced by steel and reinforced concrete. The actual name Iolani Palace, would be restored in 1935. 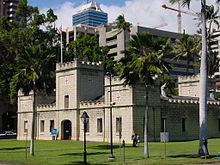 For more than 70 years, Iolani Palace had remained a functional, but neglected site. In the post war period, the building was clearly exhibiting signs of deterioration and neglect.

After 1959, when Hawaii became 50th state in the United States, efforts would begin to restore the palace.

Governor John A. Burns, would begin the process by moving the Iolani Barracks from its original position northeast of the palace. Today, it serves as a visitors center for the palace.

Government offices would be totally evacuated from the Palace in 1969. They were relocated to the new Hawaii State Capitol. 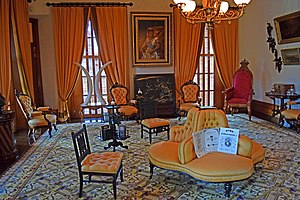 Interior of the music room with donations and artifacts in the restored palace.

Now the real painstaking effort of restoration could commence.

The grand niece of Queen Kapiolani, Liliuokalani Kawanankoa Morris, would found the Friends of Iolani Palace. This organization would oversee the massive effort, to turn back the clock.

In preparation for restoration, the Junior League of Honolulu would begin the process of extensive historical research. This would allow an in depth study on the original construction, furnishings and palace lifestyle.

To achieve this they began to look at 19th century newspapers, numerous photographs and archival manuscripts. This allowed the interior to be restored based on the original plans, as the structural restoration of the building, was being accomplished on the exterior. 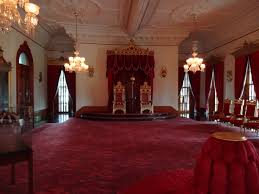 Then began the massive and ongoing effort to make acquisitions of original palace objects. This was conducted through both purchases and donations. Many original pieces, have subsequently been returned.

Government grants and private funding allowed the reproduction of original fabrics and finishes. This gave the various rooms of the Palace their late 19th century appearance, once again.

In 1978, Iolani Palace opened up to the public as a historical museum.

In the basement, is a noteworthy photographic display of the Palace that details the process taken in the restoration.

Special ceremonies are held yearly on the birthdays of King Kalakaua and Queen Kapiolani, these can be witnesses on November 16th and December 28th respectively.

A movie titled Princess Kaiulani about Princess Victoria Kaiulani Cleghorn was actually filmed at the palace in 2008.

Iolani is located in downtown Honolulu, on the corner of King Street and Richards Street.

The vehicle entrance to the Palace Grounds is located off Lifelike Mall, on the left of King Street between the Palace and the Hawaii State Library.

If you arrive by car, it is recommended that you park in the private parking garage at Alii Place at 1099 Alakea Street. The cost of parking is $3.00 USD for the first two hours and $1.59 for each additional half hour.

Email address for tickets is palacetickets@iolanipalace.org

A Self-Led Audio Tour – The audio portion is 45 minutes in length. It is available in English, French, German, Hawaiian, Japanese, Korean, Mandarin, and Spanish.

Both options include a tour of the first and second floors of Iolani Palace, followed by self-guided exploration, of the basement gallery exhibits.

The suggested time needed for viewing is between 60-90 minutes. Tour options may vary, based on the day of the week and the time.

There is an introductory video A King’s Noble Vision shown every half hour, in the Visitors Center. Viewing of the film, is free of charge.

Periodically Iolani Palace is open on Sundays for Kamaaina Sunday. (usually once a month)

The Iolani Palace is closed on federal holidays.

The gift shop is located in the Iolani Barracks, which is the Visitors Center.

Tourists are welcome to photograph the Iolani Palace interior, exterior, and grounds for personal use. However, flash photography and video are not permitted.

Is also available throughout Honolulu and nearby communities.