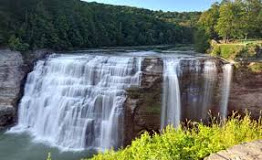 Letchworth State Park is to be found in the western part of New York state. Known as the Grand Canyon Of The East, this treasure chest of natural beauty is the 11th stop in the series Off The Beaten Path. Founded in 1906, Letchworth has become a crown jewel of the New York State Park System.

Situated in the two New York state counties of Livingston and Wyoming, the park is located 35 miles (56 kilometers) southwest of Rochester and 60 miles (97 kilometers) southeast of Buffalo. Letchworth comprises 14,427 acres (58.4 km2) of land in upstate New York. The park is just under a 5 hour drive, from New York City at 314.9 miles. 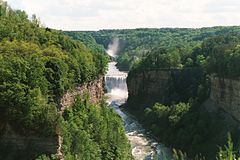 View of the Middle Falls, with mist from the Upper Falls and the Portage Viaduct visible in the background.

Letchworth State Park is roughly 17 miles long. It follows the course of the Genesee River, as it flows north through a deep gorge, that traverses the park.

The rock walls on either side of the ravine, rise up to a height of 550 feet (170 meters) and narrow to 400 feet, near the three main waterfalls, providing the basis for the claim of being the Grand Canyon of the East.

The Genesee River movement over the diverse terrain of the gorge, allows for the existence of several notable waterfalls. These are the Upper, Middle and Lower Falls.

The Middle Falls is the highest among them. The Upper Falls, has an active railroad trestle known as the Portage Viaduct, crossing just above it. The latter was built in 1875 and is still in use. 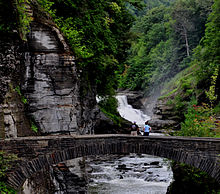 There are as many as 50 smaller waterfalls on tributaries, that flow into the Genesee.

The three most viewed falls are all located in Portage Canyon, the southern section of the park.

The park also contains Inspiration Falls, a ribbon waterfall that is located on a tributary creek, a short distance from the Inspiration Point Overlook. It is just 0.4 miles west of the park Visitor Center.

The waterfall features, a total drop of an impressive 350 feet. Although popular with tourists, it remains dependent on abundant rainfall. Therefore, based on the time of the year, it can be totally underwhelming.

The history of the park can be traced back to 1859, when the industrialist William Pryor Letchworth began purchasing land, near what is today the Middle Falls (Portage Falls). He simultaneously began construction on his Glen Iris Estate. 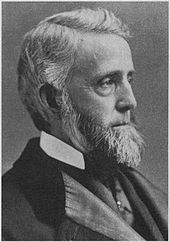 From buying an original 109 acres that year, he would spend the ensuing decades, expanding the size of his holdings.

These purchases successfully halted the plans to build a hydroelectric dam in the gorge, that would of altered the flow of the river. It would have also lessened flows over the major waterfalls in the future park.

In 1906, Letchworth would bequeath his 1,000 acres landed estate to the state New York. It would be this endowment, that would soon form the core of the newly created Letchworth State Park.

In addition, it has also been named as the best state park in New York for landscape photography.

Park entrances are located near the towns of Castile, Mount Morris, Perry and Portageville. There is a paved two or three-lane road follows the west side of the gorge. This allows travelers to stop and enjoy the many scenic viewpoints, that have been created by various geologic processes. 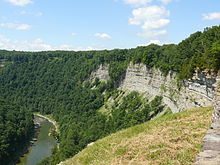 View of the Genesee River and Gorge in the park.

There are 66 miles of hiking trails and horse-riding courses as well. The only path that crosses the Genesee River in the park, is on the stone bridge that can be found just below the Lower Falls.

The amenities of the park include an assortment of pavilions, picnic tables, playgrounds, two large swimming pools, cabins, campsites for tents, and trailer sites with dumping stations.

Activities within the park include biking, hiking kayaking, geocaching and whitewater rafting.

Hunting of deer and wild turkey, as well as fishing, are also accessible when in season.

Hot air ballooning is available at the park, but it totally weather dependent. 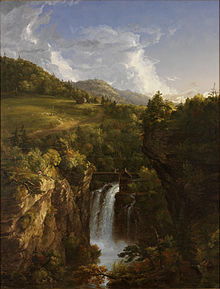 The entire area was once the homeland of the Seneca people. They were largely forced out, after the American Revolutionary War, since the Seneca had been allies of the British.

The original inhabitants called the land in the park Sehgahunda, which roughly translates to mean Vale of the Three Falls.

According to the Seneca, the Middle Falls identified as Ska-ga-dee, were so marvelous, that it made the sun stop at midday.

In the memory of these early inhabitants, travelers can find the ancient Indian Council House of the Senecas, located on the grounds.

It was the beauty of the places surrounding the gorge, that caused Letchworth to hire the famous landscape artist William Webster, to design the numerous winding paths and roadways, throughout the property.

He was also commissioned to add rustic bridges, lakes, and a fountain.

The park contains the Glen Iris Inn, Letchworth’s former home, which has been remade for use as a hotel. It is located on the top of the hill, overlooking Middle Falls. Tourists can arrange for overnight accommodations and in-season meals. The facility is also open to the public for breakfast, lunch and dinner. 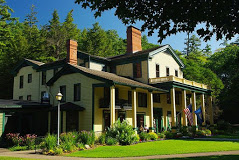 The Glen Iris Hotel noted for its Greek Revival and Italianate architectural design, was placed on the U.S. National Register of Historic Places in 2005.

When the American Scenic and Preservation Society of New York took over the management of the Letchworth Estate, a special effort was made to organize and preserve the personal library collection of the now famous industrialist.

This accumulation is now kept, in a separate dedicated building.

The park is also the site of the William Pryor Letchworth Museum, which was founded with the extensive collections of the park’s founder. The institution has a focus on both the cultural and natural history of the Genesee Valley. This includes artifacts from the Seneca, early pioneers, the Genesee Valley Canal and Letchworth himself, upon his death in 1910.

In 2016, the Eric Humphrey Nature Center opened. It is operated year round by the state of New York. The 5,000 square foot sustainable building, features a number of classrooms, meeting rooms, a research lab, a butterfly garden and connections to various trails. 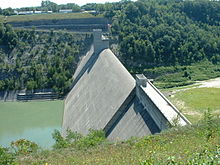 Another interesting feature of the park is the Mount Morris Dam found at the north end of the park. The dam was completed in 1954.

The Genesee River became both wider and deeper upstream, due to this construction, but areas below the dam, were henceforth spared yearly flooding.

The Mount Morris Dam is the largest flood control device known as concrete gravity, east of the Mississippi River. The proportions of the dam are impressive, at 1,028 feet in length and 239 feet in height from the riverbed. 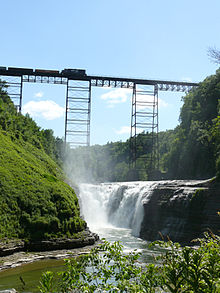 Upper Falls with a train passing over the Portage Viaduct

Letchworth, as a New York State Park, charges a vehicle use fee to enter. It is typically $10.00 USD (United States Dollar), unless you possess a state park admittance pass. Additional charges apply for the use of outdoor accommodation and facilities.

If coming from the east, Letchworth State Park can best be reached by using either Interstate 80 or Interstate 86, also known as NY Route 17. The park will be found off of 19A.

Cabins are accessible from April through mid November, with a few ready for occupancy, year round. Both require reservations to guarantee availability.

The Glen Iris Inn remains in operation from the middle of April to the end of October.

The museum is open to the public from May 01 to October 31.

Is also available at the Maplewood Lodge, which is inside the park and in nearby communities.