The Museum of Geology is located in Rapid City, at the South Dakota School of Mines and Technology, within the beautiful Black Hills. The museum includes rare fossils, mounted skeletons of dinosaurs, and other land and sea creatures, as well as a spectacular collection of minerals. It is the 30th stop in the travel series “Off The Beaten Path”.

The South Dakota School of Mines and Technology was founded in 1885. The historic focus of the institute, was on the area’s primary industry of mining. Over the subsequent years, it has evolved into one of the leading sciences and engineering universities in the region.

The geologic and paleontological collections have grown over the years, to an incredible assemblage of over 500,000 individual specimens.

Professor G.E. Bailey of Hill City provided over 5000 mineral and fossil samples, that formed the foundation for the Museum of Geology, which was founded the same year as the school.

Construction of the Old Prep Building also began in 1885, as a place to house the artifacts that were being collected for the museum.

In 1899, Dr. Cleophas C. O’Harra, the Professor of Geology and Mineralogy led the first school sponsored paleontology expedition into the Badlands of South Dakota.

An alligator snout found on the trip became the first specimen curated into the museum paleontology collection. 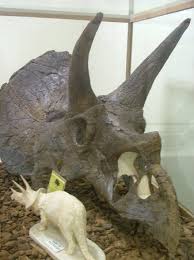 In 1903 the Museum of Geology along with the Department of Geology and Mineralogy, moves to the Main Building.

Throughout the 1920’s a number of important fossils would be discovered in the field and put on display.   This would include a nearly complete alligator sample, a large Xiphactinus (fish) skeleton and a Triceratops skull.

In 1942, the Museum exhibits are relocated to the third floor of the newly completed O’Harra building.

Two important additions to the paleontology collections were the 1945 discovery of a mosasaur fossil made by a schoolboy, and the 1949 detection of plesiosaur remains by a rancher.

The latter half of the 20th century saw an expansion of the museum collections, through further excavations and donations.

Further excavations would include camel skeletons and a tyrannosaurus skull.

A notable donation came from the estate of Harold J. Cook in 1965. A large assortment of books, maps, fossils, minerals, and rocks came into the possession of the museum.

A 1999, donation was made by Dr. Gail Bishop from Georgia Southern University. It contained a large collection of fossil decapods and associated archives.

A number of large endowments over the years, have helped contribute to the growth and educational purposes of the museum.

The Museum of Geology is the hidden jewel of the university. The mission of the institution has been to conserve the rich geological heritage of the state.

The museum has collected, researched and organized rare and often unique artifacts.

There are extensive exhibits that concentrate on paleontology.  These include mounted dinosaurs, mammals, White River Badlands, marine reptiles and fish.

The fossils are arranged in time specific dioramas.

Also, on display are mineral collections including the Hall of South Dakota Minerals, meteorites, ores and a particularly popular fluorescent mineral room. Guests are able to learn about minerals, including gems, crystals and the rocks they form.

A Kids’ Zone offers hands on experiences for younger visitors.

There are even opportunities for summer field paleo classes.

The James E. Martin Paleontology Research Laboratory is a 33,000 square foot facility, specifically built as a repository for the Museum of Geology collections and archives. The research activities in geology and paleontology conducted here, greatly enhance the mission of the museum to explore the natural history of Earth, through scientific inquiry.

Unfortunately, the research laboratory is not open for public tours.

The Museum of Geology in Rapid City, lies east of the Black Hills National Forest, in western South Dakota. It is known as a gateway to Mt. Rushmore. It is just south of Interstate 90. Rapid City is the second largest city in the state. The Museum is located on the 3rd floor of the O’Harra Building at the School of Mines and Technology.

The Museum of Geology

Summer Season: May 01 through August 31.

Guided tours are available for groups if arranged in advance.

Is available in Rapid City, just a few minutes from the Geology Museum.