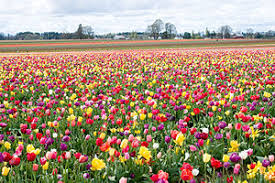 The Skagit Valley Tulip Festival is one of the destination events for the Pacific Northwest. It is held during the entire month of April, on an annual basis. During this time, millions of tulips will flower, in a parade of endless color in Mount Vernon, Washington. The Skagit Valley has now officially welcomed visitors from around the world for 34 years, to partake in a driving tour. It is our 21st stop in the series Off the Beaten Path.

It is the largest festival in the state of Washington, with hundreds of thousand of visitors arriving annually, from 93 different countries, to see the interminable acres of flowering bulbs.

The Skagit Valley Tulip Festival was selected as the number 1 street fair in KING TV’s Best of the Northwest awards in 2010.

Tulips have been farmed in the Skagit Valley, since the early 1900’s. The evolution of bulb planting in the region, can be traced back to 1883, with the arrival of George Gibbs from England. He settled in Orcas Island, where Gibbs at first raised apples and hazelnuts.

Nine years later, Gibbs would purchase five dollars worth of flower bulbs. He would dig them up just two years later and would discover, that they had multiplied considerably. Gibbs would soon realize the full potential for growing bulbs, in the region of Puget Sound.

Gibbs contacted planters of tulip bulbs in the Netherlands, to make an inquiry of their business practices. He found them to be largely non-communicative, about their industry.

Once Gibbs sent a number of bulbs to them, the impressed Dutch growers soon traveled to see for themselves, the prospective idea of raising tulips, outside of Holland.

In 1899, Gibbs would write to the Department of Agriculture in the United States. It was in regard to the possible commercial prospects, of growing flower bulbs in the region on a large scale . Officials of the American government were quite interested, given the glowing report sent by Gibbs.

In 1905, the department sent Gibbs a total of 15,000 imported bulbs from the Netherlands, to grow as an experiment. The contract was so successful, that officials from the agency decided to establish their own 10-acre test garden near Bellingham, Washington in 1908.

As a result, the Bellingham Tulip Festival would appear, starting in 1920. It was created to celebrate the success of the new and rapidly growing bulb industry, throughout the region.

In response to the Great Depression, this particular festival would soon come to an end after a ten year run.

A number of bulb freezes that occurred in 1916, 1925 and again in 1929, also brought about heavy financial losses to the local growers. Subsequently, these growers would migrate further south, into Skagit County.

The industry would end up growing far larger on the whole, with the arrival of William Roozen to the United States in 1946. He left behind a successful bulb growing business, that had lasted for six generations in the Netherlands.

Roozen spent a number of years, working on several different local farms. He started his own Skagit farm in 1950 and in 1955, bought the Washington Bulb Company. This made him the leader among the four flower-growing families in the area.

The Washington Bulb Company became the leading grower of tulip, daffodil and iris bulbs in North America from then on.

The company farm operates a public display garden and a gift shop known as RoozenGaarde. Along side the DeGoede family’s Tulip Town, these form the major tourist attractions during the Tulip Festival.

Local tulip growers had already showcased their bulbs through display gardens for many years, prior to the creation of an official festival in the 1980’s.

In 1984, the Mount Vernon Chamber of Commerce first established the Skagit Valley Tulip Festival, as a three day event. It has grown over time to now include, the entire month of April. It also coincides with art shows, barbecues, bike tours, photo contests, street fairs, wine tastings and a number of sporting events.

RoozenGaarde is a popular location for tulip viewing during the festival.

In addition, to its famous tulips RoozenGaarde in Mount Vernon also features an authentic Dutch windmill.

Tulip Town has trolley rides, to escort visitors through the gardens. These run from 10:00 AM to 4:00 PM, weather permitting.

During the Tulip Festivals, professional kite flyers showcase their kites in the fields at Tulip Town.

RoozenGaarde consists of a five acre Display Garden, planted with nearly 500,000 bulbs, with an additional 25 acres of tulip fields and 22 acres of daffodils. There are over 150 types on display, which are labeled, if you wish to purchase any of them. The full color catalog, actually offers free tulips. 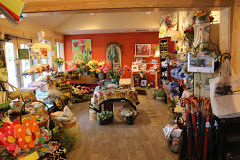 Skagit Valley is adjacent to Interstate 5. The gardens are 60 miles north of Seattle and 70 miles south of Vancouver, Canada.

Children under 5 years are free.

Children under 5 years are free.

Parking is free at both gardens. RoozenGaarde parking is on Beaver Marsh Road and Tulip Town parking is on Bradshaw Road. Both sites have overflow lots for days when there are far more tourists.

Getting Around the Festival

Another option is to join an actual guided tour. Tulip tours are organized by Roads2Tulips Adventures, Shutter Tours and Skagit Guided Adventures.

Bring a camera to capture the beauty and abundance of flowers. However, drones are not permitted to fly above the fields and gardens.

The Administrative Office and Store is open Monday through Friday

During the month of April the office is open 7 days a week.

Tulip Town is open from 9:00 AM and 5:00 PM even later, if weather permits during the month of April.

Is available in the local nearby communities. There are a number of hotels, casino-resorts, bed and breakfasts and motels in the area. It is advisable to book accommodations well in advance, given the increasing popularity of the Tulip Festival, from tourists from around the world.