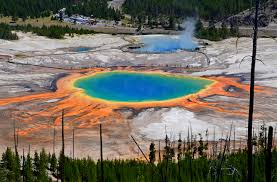 Grand Prismatic is the largest hot spring in the United States and is situated in the state of Wyoming. Located in Yellowstone National Park, Grand Prismatic Spring is considered by many travelers to be the jewel in the crown of geothermal attractions at the park and in continental North America. It is the third largest hot spring in the world, after Frying Pan Lake in New Zealand and Boiling Lake in Dominica. It is the 19th stop in our series, Off The Beaten Path.

Grand Prismatic can be found in the Midway Geyser Basin. The name is derived from the striking coloration noted by geologists, working in the Hayden Geological Survey of 1871. One can easily observe a rainbow of color that includes blue, green, orange, red and yellow.

Aerial view of the hot spring

The original recordings of the Grand Prismatic are dated from early European explorers and surveyors. They spoke of an incredibly beautiful spring, that contained thermal waters, that had a cascade of various colors, depending on the season.

A group of fur trappers from the American Fur Company crossed the Midway Geyser Basin in 1839. They made note of a boiling lake, which most likely was the Grand Prismatic, since they described it as having a diameter of 300 feet (90 meters). 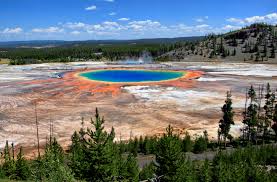 Another view of the Hot Spring.

The Washburn-Langford-Doane Expedition would arrive in 1870. They must of seen the Grand Prismatic, because they identified the nearby 50 foot (15 meters) geyser, known today as the Excelsior.

In 2014 a tourist from the Netherlands flew a drone into the ecologically fragile Grand Prismatic. Although it was an accident, photography of this kind remains illegal. The equipment disappeared and has never been recovered.

The brilliant colors found in the spring, are the result of microbial mats which are multi-layered sheets of microorganisms, found around the edges of the mineral rich water. The are mainly comprised of archaea and bacteria.

These mats produce colors ranging from green to red. The amount of color depends on the ratio of chlorophyll to carotenoids, as well as the range of temperature in the runoff.

There is a seasonal change in the vivid coloration. In the summer months there is a greater abundance of orange and red. In the winter time, there is far more dark green. 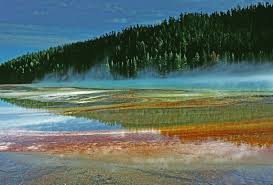 The center part of the pool is deep blue, which remains constant throughout the year. It is the result from the inherent color of water. The center of the spring is sterile of life, due to the extreme heat emanating from the ground.

Grand Prismatic Hot Spring is near 370 feet (110 meters) in diameter. It has a depth of 160 feet (50 meters) which is more than ten stories total and has a water temperature of 160 degrees Fahrenheit or 70 degrees Celsius.

The spring discharges a constant flow of water, that equals 560 gallons (2,100 liters) a minute. 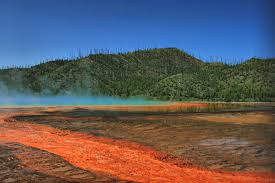 In 1968, a researcher named Thomas Brock discovered a microbe living in the extremely hot springs of Yellowstone National Park. This exploit, has led to major medical and scientific advances. It includes the sequencing of the entire human genome.

The existence of the microbes will also help NASA (National Aeronautics Space Administration) in identifying extraterrestrial life, on apparently inhospitable planets and asteroids.

The best viewing time of the Grand Prismatic is in the early morning hours before 9 A.M. Travelers can also avoid larger groups of people, later in the day, preferably after 3:00 P.M.

It is the most photographed feature in Yellowstone and therefore can become quite crowded at times, especially during the summer and less so in the early autumn months. This is the height of the tourist season.

The best viewing of the colors for the hot spring, is during cloudless days. However, any season or weather, will provide a more than adequate view of the spring. Many tourists will come back a number of times, to view the different color variations of the hot spring.

If you are traveling during inclement weather, road updates can be accessed by calling (307) 344- 2117

There are no additional fees to see various attractions inside the park like Grand Prismatic Hot Spring.

Tickets for motorcycles or snowmobiles are $25.00 USD for a 7 day pass.

Includes free parking inside the park, but parking by Grand Prismatic Hot Spring is limited.

Once inside Yellowstone Park, from Madison Junction head south towards Old Faithful Geyser. Or one can travel north from Old Faithful. Park in the Midway Geyser parking area, and it is a short walk uphill on the boardwalks.

There is a picnic area ¼ of a mile north, which also offers parking, and there is very limited parking alongside the road.

July and August are the only months that all amenities in Yellowstone National Park are open.

Once roads are open for the summer season, they are not gated at night. People may enter and exit the park 24 hours a day, seven days a week.

You can always access the park from the north, no matter the time of year. The road between the North Entrance at Gardiner, through Mammoth Hot Springs, to the Northeast Entrance at Cooke City is open year round.

Grand Prismatic Hot Spring is open year round as well. Travelers need to check what entry gate will be open and most convenient to access, based on the direction they are coming from.

Is available in nearby communities surrounding the park and if booked well in advance inside Yellowstone.

For those visitors wishing to stay at the park contact https://www.yellowstonenationalparklodges.com/