My First Encounter with an Argentine Con Artist

Today, glorious Friday. I only had a few pesos on me so Julieta (a girl I work with) and I decided to go get a sandwich. As we turn the corner something organish-brown catches my eye. To my horror, a dog is lying on the street – on his side with all four legs outstretched – next to the curb.

“Oh my God Julieta look at that dog!?! Is it dead?!?!”
“It must be sick or dead, a healthy dog doesn’t lie in the street like that” 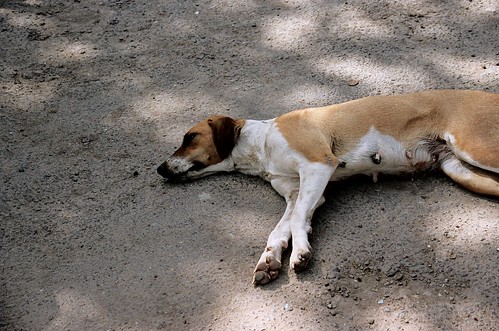 I stand aghast watching people literally walk over the sick dog that blocks their path. I rush to it – I have to get it out of the street, I have to save this helpless animal. Julieta and I call to the dog – veni perro, veni! I whistle, squeal, make every and any annoying sound I can think of but the dog doesn’t move. I realize I am literally watching it take its last breath – and tears well up in my eyes.

Finally, the dog raises its head. Excited, I make more noises hoping he will come to me and out of the street. He looks at me with surprisingly bright eyes but certain death weighs heavy and he returns his head to the dirty street. Surely he can not hold on much longer – he is weakening with every breath and movement. I tell Julieta I am going to cross the street to buy him some food and water with my 5 measly pesos.

As I turn, a woman passing by also notices the dying dog. She makes a cooing noise accompanied with a sad sigh and brings out half of a sandwich from her purse. She pulls out the meat from between the mustardy pieces of bread and waves it in front of his nose. It catches his attention, and he slowly raises his head again. Even in the temporal space between life and death, his strong will to survive allows him one last meal. Gingerly, he rises, and goes toward the woman with the sandwich. He limps severly but slowly makes it on to the curb. I turn to Julieta.

“Isnt there someone we can call to come pick up the dog? Isn’t there a humane society or something that can help him?”

She looks at me sadly and shakes her head. I think – what do you mean no?!? What kind of country is this? Someone call someone! Call the government! Call the News! What has happened to these people that they are so disconnected from another living creature?!? Anger and hopelesness crawl up my throat.

My attention is back to the dog, and he eats slowly and gently from the woman’s hands while standing on his 3 good legs. She points at his injured leg and comments on where she thinks it is hurt. I can not help but notice he is unkempt: the tip of his ear is missing, his nails are too long and in some places his fur is dirty and patchy. I think about the chance of saving him, taking him home, giving him the love and attention he deserves – if only he can hold on to precious life just a little longer.

Quite possibly he will need surgery for his injured leg, its only a miracle I got a raise this month so I can pay for it. She pulls out the other half of the sandwich and he wags his small bony tail. I thank the woman for her kind heart and she smiles slightly. Soon the dog finishes and looks at all three of us for more. The woman opens her hands and says “nada mas” and I wait for the dog to sit down again as I plan my next move to ensure his rescue.

To my surprise, the dog doesn’t sit down. In fact, he stands suddenly tall and proud – he sets his injured leg back on the ground and puts weight on it. He licks his chops, and watches people cross the same street that was his death bed only minutes ago. Then, he turns and that bony tail wags faster and faster.

A shit eater grin appears on his con artist face and he begins to run – fast and with ease. He has lost his limp and bounds across the sidewalk. He prances down the crowded street with his pink tongue sliming out the side. My jaw drops. I wipe the tears from my eyes just to see him turn the corner and disappear out of site. I laugh and can only wonder where he will find his next sandwich, and next victim.

This story is from Rebecca, a 27 and currently living in Buenos Aires with her boyfriend, Felix and cat, Ziggy. She is originally from Wisconsin, USA and likes traveling, beer, cheese and the Green Bay Packers.